Stuart Davis shared himself, his art, and his thoughts about the Integral Movement with members of Integral New York. On April 20, we met at the TAI center— located at 150 West 30th Street—a new venue for Integral events in NYC. The room was lovely in its starkness, the walls were black, and the audience of about 40 surrounded Stuart in wide rows of a semi-circles. Stuart sported a tee shirt that he had decided “needed to be worn inside out and backwards,” with a small slit at the neck for comfort. His sneakers were silver and red, like futuristic bowling shoes. Our concert began with Fear of Light, a song that addressed resistance to transcendence and clinging to contraction. Stuart commented that he was glad to play this song to an Integral crowd where people would appreciate the lyrics. Not only did I find myself resonating with the concept “fear of light,” but I was also reminded of No Boundary, where Ken Wilber wrote:

As a person takes up the special conditions of a spiritual practice, he will begin to realize, with increasing certainty and clarity, an exasperating but unmistakable fact: nobody wants unity consciousness. At all times we are, in truth, resisting unity consciousness, avoiding God, fighting the Tao . . . The understanding of this secret resistance is the ultimate key to enlightenment.

As usual, Stuart captured the poignant and passionate longing for spirit along with our very human ambivalence toward spirit in Fear of Light. The Integral Minstrel also played: Good Weird, Belle, Swim, Nothing in Between, Anesthesia Necrophilia, (requested by me), and more. Stuart offered a sophisticated and heartfelt private concert with some of his most beloved songs. Then, reading directly from his iPad, Stuart treated us to an authentic and hilarious passage about “religious vs spiritual.” The reading led into an open and vulnerable discussion of Stuart’s own inner experience over the last year and half, his dark night, the death of his father, as well as his feelings about the future of the Integral movement. 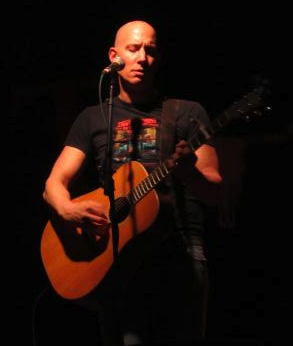 Stuart was a being of paradox that night. He brought us beauty, delight and sheer joy, while holding the space for his personal sadness over the loss of his father one month before. Stuart’s father had been a religious man—and the iPad dialogue between spiritual and religious clearly showed an artist working through profound issues on multiple levels, using his art to express and process his emotions and thoughts. Stuart shared with us that the last words his very religious Christian father—who had previously objected to Stuart’s Buddhism—had uttered right before dying were: “It’s not real.”

Stuart avoided the temptation to jump to conclusions about the meaning of such a dying declaration, and yet he could not help but wonder if his father had finally experienced a dramatic perspective shift at the very end. I was touched by Stuart’s humility, which he held right alongside his outrageous sense of humor, his obvious enjoyment in occasionally shocking his audience, and his sophisticated cognitive and verbal abilities.

This April, Stuart Davis—radiant and a bit wistful—opened his heart to Integral New York. From a first person perspective, he raised questions about Integral that he has been struggling with, and that have also been floating around the Integral community lately. For example: Why is it taking so long for Integral to reach a “tipping point” and change the world? Stuart confided in us that just a few short years ago he had felt tremendous enthusiasm and excitement, and he had been surrounded by a tight group who had shared this attitude and who had envisioned Integral generating a global shift for humanity fairly soon. That night he raised the issue of disillusionment that is familiar to many of us. Were we unrealistic about Integral? Were we too idealistic about how the world would receive us? Are we not as evolved as we thought we were? Stuart didn’t supply us with any answers, but left us holding the questions with consciousness and grace.

Stuart confided in us that his dark night had ultimately resolved without answering these questions, but instead with the realization that he should continue to devote himself to his art and trust the universe that art was the best medium through which he could offer his unique gifts to the world. I couldn’t agree more. Stuart’s art has tremendous range; he is alternately wild and penetrating, tender and embracing. His songs range from descriptions of animal cravings to sophisticated cognitive lyrics about personal and universal evolution. I am sure I am not the first person who couldn’t help thinking that Stuart has set Ken Wilber to music.

Close to the end of our evening, Integral New York Leader Gilles Herrada asked if the archetype of the Jester held any resonance for Stuart. The Integral Minstrel immediately validated Gilles’s intuition, pointing out that the Jester used humor to provoke new thoughts, point to important issues, and challenge as well as entertain. I personally have always believed that art can get away with introducing new ideas into mainstream culture sooner than any other medium. Art can slip under the radar—for a while—and infiltrate fixed ideas, adding a little wiggle room before most people notice. But as to prolific Stuart Davis, his considerable–and growing—body of work is on my radar forever.

Robin Reinach, MFA, is a writer and longtime Integral enthusiast. She lives in New York City with her daughter.