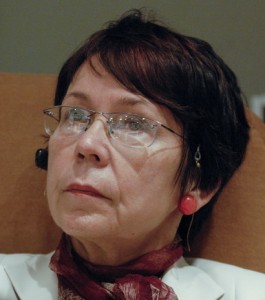 Basarab Nicolescu is already 70 years old. Those who know him can hardly believe it.  So young, so full of energy, at 70?

To understand this exceptional case we should get to know him more closely. This is what we tried to achieve in the past few months through many essays, sessions, articles and works, all dedicated to the great personality who is Basarab Nicolescu, an honorary member of the Romanian Academy, Professor at the University “Babes-Bolyai” of Cluj-Napoca.

You can check out over 150 birthday messages sent to him from all over the world or you can have a look at the special event dedicated to him at the Romanian Academy on November 12, 2012, by browsing the website:

We have tried to portray him as accurately as possible. What a difficult task! What is he, first of all? A philosopher? A physicist? A writer? A professor? A school founder? He is all of these, but above all he is the most tenacious promoter of transdisciplinarity. He is the author of the “Manifesto of Transdisciplinarity”, the founding president of the International Center for Transdisciplinary Research and Studies ‒ CIRET (which currently brings together 165 researchers from 26 countries) – as well as the Honorary President of the Institute for Transdisciplinary Studies in Science, Spirituality, Society ‒ IT4S, www.it4s.ro.

He began his education in his native town ‒ Ploiesti – with brilliant achievements: First Prize at the National Olympiad of Mathematics and also First Prize at the Literature Olympiad, Gold Medal at the First International Olympiad of Mathematics, Brasov, 1959. He completed high school with a Baccalaureate where he got, of course, the highest marks.

He graduated from the Faculty of Physics, University of Bucharest, with a dissertation on the Yang-Mills fields and self-interaction vector fields, which also obtained the highest score. After three years as an assistant professor at the same university, he left Bucharest for the Université Paris VI, thanks to a grant awarded by the French Government and the Commission for Nuclear Energy. Since 1970 he has become a theoretical physicist at CNRS, Institute of Nuclear Physics, Department of Theoretical Physics, Orsay, Laboratory of Nuclear and High Energy Physics, Université Paris VI. In 1972 he completed a PhD thesis on the theoretical study of the pion-nucleon scattering.

He was invited to the most prestigious specialized laboratories: Lawrence Berkeley Laboratory, Brown University, USA, and University of London in the UK.

His philosophical and transdisciplinary findings have become so popular worldwide that they overshadowed his research in physics. It is true that they are so highly specialized that it makes it difficult for us to discuss them here.

In 1986 he was the author of the documents from the Venice UNESCO Symposium “Science Confronted with the Limits of Knowledge ‒ Prologue: Our Cultural Past”. The declaration written by him was adopted by of all of the 17 cultural leaders who attended the Symposium.

The same year his book Nous, la Particule et le Monde was awarded the Silver Medal by the French Academy. This book has also been selected by “Universalia 1986”, Encyclopaedia Universalis Editions.

The following year he received another award from the Romanian-American Academy.

In 1991 he founded with René Berger the Reflection Group on Transdisciplinarity (GRT) at UNESCO. The same year he organized at UNESCO, Paris, the Congress “Science et Tradition: Perspectives Transdisciplinaires, Ouvertures Vers le XXIe Siècle” and the following year he attended the “End of Galileo’s Trial” at the Vatican.

He kept being seriously concerned with transdisciplinarity. In 1993 he organized the GRT UNESCO Meeting in Venice. This is where the next decade TD main priorities were established and where he launched the idea of the First World Congress of Transdisciplinarity, which took place at Convento da Arrábida, Portugal.

In 1995 he was the organizer of the International Symposium Art in Science & Science in Art: Beyond the Two Cultures, in São Paulo, Brazil and in 1996 of the Symposium Transdisciplinarity Today, UNESCO, Paris.

Between 1995 and 1997 he led the CIRET-UNESCO Project ‘Transdisciplinary Evolution of the University’.

In 2000, the Romanian government, with the support of France and of the International Francophone Organization (OIF), proposed him as the UNESCO General Vice Director for Science.

Between 2000 and 2001 he was Visiting Professor at the University of Gerona, Spain, and between 2000 and 2002 he was a member of the working group “Implications Philosophiques de la Science Contemporaine”, Académie des Sciences Morales et Politiques, France, under the leadership of Bernard d’ Espagnat. In 1996 he founded and became the director of the collection “Transdisciplinarité”, Rocher, Monaco. In 1998 he became a member of the Academic Council of the International Institute of Advanced Thinking, University of Salvador, Buenos Aires. The same year he was elected as the Honorary President of the International Foundation “Stéphane Lupasco” Science and Culture, Iasi, Romania.

Between 2000 and 2002 he took part in the Science and Spiritual Quest (SSQ2) Templeton Foundation (USA) “Physics and Cosmology”. In 2003 he founded and coordinated the collection “Les Roumains de Paris”, Oxus, Paris.

He was also a founding member of ISSR (International Society for Science & Religion).

He became Co-Editor-in-Chief of the “Transdisciplinary Journal of Engineering & Science”, Texas, U.S.

Another important aspect of his activity are his books. Apart from the aformentioned Nous, le Particle et le Monde, published in France, Romania and Portugal, he also published Théorèmes Poétiques, Rocher, Monaco, 1994, translated into Romanian in 1996.

An exceptional book is  La Science, le Sens et l’évolution – Essai sur Jakob Boehme, Félin, Paris, 1988; Philippe Lebaud, Paris, 1995, which received the Benjamin Franklin Award for Best History Book, USA, 1992 and the Award of the Union of Writers of Romania, 1993 (for the Romanian version). The book also appeared in Brazil and the U.S.

A book that very dear to him, devoted to the famous Romanian mathematician and poet Barbu, was Ion Barbu. Second Game Cosmology, published in 1968 and reprinted in 2004.

Qu’est-le que la Réalité? was launched simultaneously in Bucharest and Montreal in 2009 and translated in 2012 in São Paulo.

He also directs an important book collection which has already published over 60 titles. It was first entitled “Science and Religion”, and then extended to “Science, Spirituality, Society”. It is a real library available to Romanian readers, as well as the Journal for Transdisciplinary Studies (6 issues) and Transdisciplinary Studies. Science, Spirituality, Society, last (vol. 3) published on the occasion of the 70th anniversary of Basarab Nicolescu’s birthday.

His Manifesto of Transdisciplinarity, originally published in France in 1996, was then published in Romania, Brazil, Portugal, the U.S., Mexico and Syria.

In 2007 he received in Athens the “Inter-Balkan Cultural Association – Rigas’ Charta” Award, and in 2010 the Ramamoorthy & Yeh TD Distinguished Award, given by the Academy of TD Learning & Advanced Studies Southwestern University, Georgetown, Texas, US.

Of course that is only an extremely simplified portrait of Basarab Nicolescu, who is one of the most important Romanian personalities of contemporary culture whose work is still in progress.

Magda Stavinschi is Director of the Astronomical Institute of the Romanian Academy (1990-2005), president of the IAU Comm. “Astronomy Education and Development (2006-2009), retired president (2009-2012), founder member of the EAS, president of the Romanian Association “Astronomia 21”, chair of the “Archaeoastronomical Heritage” of the SEAC, chair of the IAU WG „Future Development of the Ground-Based Astrometry” (2000-2006), its vice-chair (from 2006), Romanian representant for EUROPLANET (from 2005), associate member of the Institut de Mécanique Céleste et Calcul des Ephémérides, Single Point of Contact for the “IYA 2009”, then of the “Beyond IYA2009”. President of the Association “The Dialogue between Science and Theology in Romania” (ADSTR). Executive president of the Institute for Transdisciplinary Studies. Science, Spirituality, Society” (IT4S). Officier de l’Ordre National de Merite (France, from 2005).