Design thinking methods and approaches are gaining credibility in mainstream corporate, nonprofit and educational contexts.  But what exactly is design thinking and how can it serve integrally informed change work? As with any left quadrant form of expertise, design methods may appear idiosyncratic or ‘fuzzy’ until we find ways to translate efficacies into right-hand quadrant measures of real innovation.

Although over-hyped as well as criticized in the blogs, the ways and means of design thinking do appear to be timely and well-suited to the types of challenges we face today. The appearance of several new MBA in Design program launches (Wecker), as well as the presence of in-house design learning laboratories at firms such as Google and leading organizations such as Mayo Clinic are signals that design methodologies are sticking as mainstream business practices. As integralists we can perhaps best appreciate the value of design as a stance toward complexity. Because designing is inherently about the translation of vision into action, the practices of designing offer divergent approaches to strategic problem/boundary articulation as well as proven and repeatable convergent tactics to optimize agile and creative responses to complex conditions.

I aim to highlight cases of designing-in-action that point to patterns of unrecognized potential opportunity in day-to-day workflows and norms. Design thinking, in diverging from business as usual (the brief, the proforma), tends to open up new questions and new spaces for creative world-making.  In a conversation with my colleague Linda Nelson Keane in preparation for this article, she referred to untapped potential opportunities enfolded within architectural sites and design processes. Her point was that the media tend to polarize issues and skew toward political positions and in so doing often fail to discover the larger systemic social and cultural issues that are latent in a design site/context. These latent possibilities can point us toward the essence of what is really at stake in every design decision.

The following case study about the shift from Modernist, to Postmodernist, and even to the prefiguring of a Post-postmodernist (or integral) mode of urban civic planning, describes a new kind of role for not just the architect but the alderman, attorney and engineer. This new role of the professional is of a different order– multivalent, translational and facilitative in service of new kinds of processes unfolding in time and space. Design ideation and prototypes are examples of design tools that invite elected officials, specialists, and citizens into a dynamic co-envisioning of possible city futures and counterproposals in a real-time co-creative cross-functional workflow.

The Milwaukee Council Ecological Gateway, an alternative lakefront development plan, seeks to optimize nature, art, science and culture in the process of urban renewal. Achieving such a goal will require a post-conventional urban planning process inclusive of novel multi-stakeholder alliances in order to move beyond public/private ownership cul-de-sacs.

Professional architects today occupy an increasingly narrow niche situated between the design-build side of the pervasive construction industry and the rarified world of “starchitects” who design signature corporate and cultural landmarks around the globe or private residences for an elite few. Making matters of role and function ever more tricky, the shadow of failed urban utopian visions of the Modern era still looms large. It can be hard these days for an architect to know where to stand.

Whereas formerly the role of the professional architect might have been confined mainly to UL (aesthetics) and UR (materials, form and styling) quadrants, beginning in the late 1960s postmodern architectural theory followed by postmodern architectural practice became much more engaged with the cultural We space of the LL quadrant and with the formal and informal political, economic and informational networks and infrastructures of the LR quadrant.

In response, many architects are expanding their roles in society, forging integral alliances with urban planners, sociologists, citizens, journalists, economists and others – both experts and laypersons, as they seek to enhance their connectivity and lateral influence in service of vibrant urban futures. Many post-postmodern architects and designers today are demonstrating that designing can serve as a space of translation and mediation allowing propositional ideas to benefit from scrutiny across a variety of professional domains.

In the global context, long-range urban planning, civic re-investment and sustainable development are fast becoming essential requirements not just reserved for eco-tourism but for baseline economic viability of cities. In the US Midwestern context, Preserve Our Parks, a group of activists representing a broad coalition of well-placed professionals, is challenging the City of Milwaukee to maintain public lands for public use and to lend spatio-political value and prominence to public programmable park spaces whilst re-investing in its civic gateway. Preserve Our Parks opposes the existing development concept that seeks to refresh Milwaukee’s economic and cultural identity by means of an urban gateway anchored by the Couture, a hotel and residential development envisioned on the site of what is now a parking facility.

The Couture plan, which has support of many local officials, has sparked a range of creative challenges via governmental, legal and policy channels. Milwaukee-based STUDIO 1032 Architecture and Environmental Design was invited by Preserve Our Parks to develop a range of alternative briefs in response to the existing plan for this crucial 21st Century spatio-urban front door for the City of Milwaukee. Rather than assuming a predictably Green adversarial stance, STUDIO 1032 instead built on good ideas within the existing plan while also bringing forward fresh solutions that seek to mitigate collapse into conventional sectoral politics by designing win/win outcomes for key beneficiary groups.

Transdisciplinarily enriched propositions are more viable because they transcend the blind spots of disciplinary thinking and are thus more resilient to real-world conditions. Professional architects and planners such as STUDIO 1032 are making integral propositions about public civic spaces that invite transdisciplinary responses that can only come from novel alliances and fresh conversations among constituencies that may have no former precedent for being in dialogue.

“We have been considering this site for over a decade and when the city made plans that seem to not address all of the components of 21st century ecological urbanism, a group of activists asked us to help them visualize something more progressive culturally, socially and environmentally.”– Keane, L.N.

Design propositions can drive cross-sectoral alliances and alignments toward broader, more inclusive and longer term goals. Such designers strive for inclusivity and win/win outcomes that place value on both tax revenues as well as public lands, for example. In seeking to move beyond the professionalized sectoral politics that often characterize urban planning and renewal process, the post-postmodern architect lives the role of networker and connector charged with the important task of making sense across disciplinary norms and vocabularies in an attempt to establish enough shared meaning (LL) to allow systemic change to take its natural steps (LR). 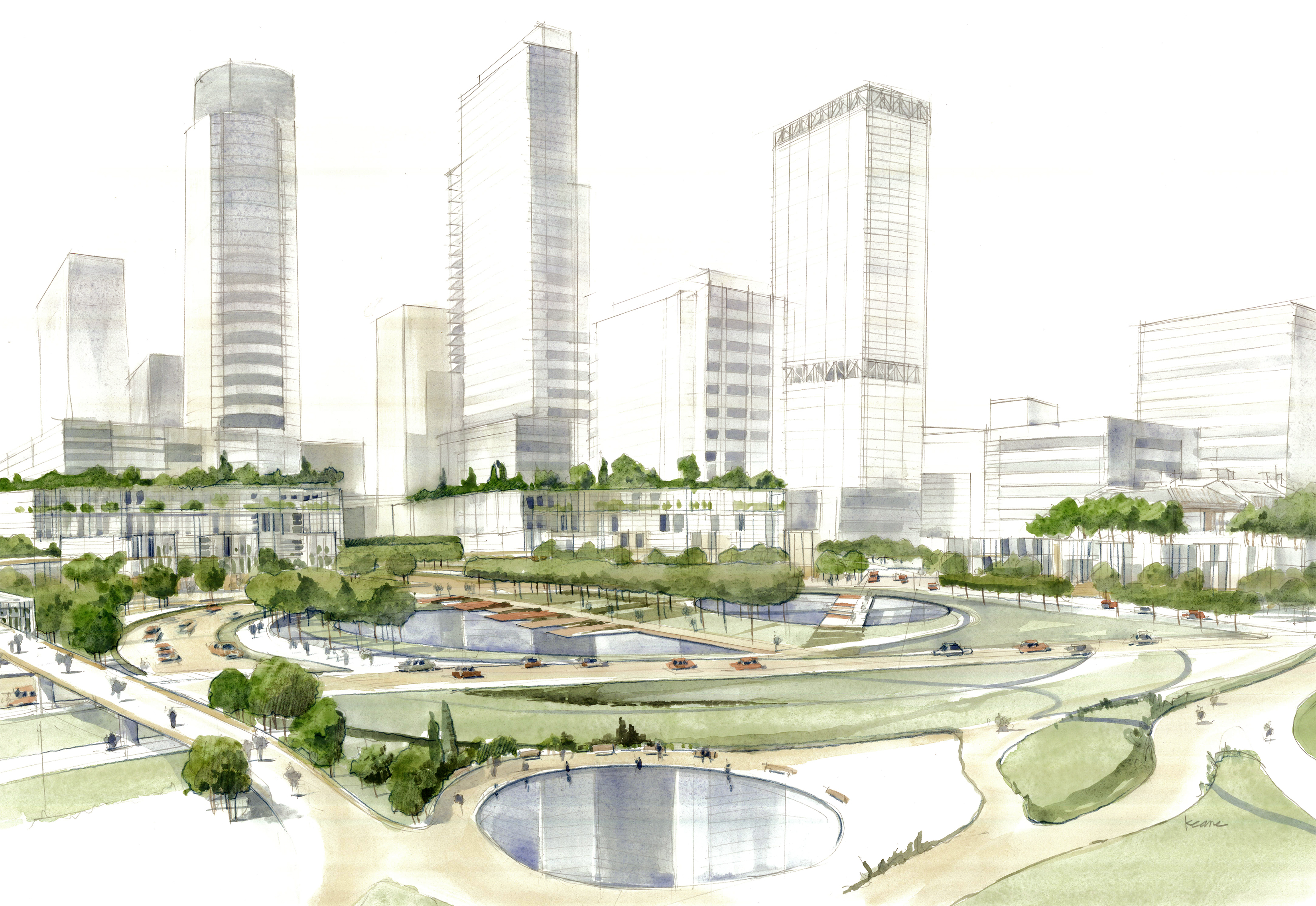 STUDIO 1032 developed several stakeholder participatory urban design propositions, one of which, MILWAUKEE ENVIRONMENTAL ENTRANCE: NATURE + ART + S C IENC E + CULTURE, was made public in June within the context of the launch of a public vetting of alternate options. Speaking to the entire range of potential users, the STUDIO 1032 proposal gathers the pedestrian experience through the four seasons, and brings it into vivid dialogue with a possible Milwaukee of the future – a real place within a global economy on a planet of cities.

“Arriving at the Lakefront in Milwaukee can be an eye opening, educationally enlightening experience for all ages. Milwaukee’s lakefront connects nature with art (Milwaukee Art Museum) science (Discovery World), music (Summerfest) with Milwaukee’s heritage (Ethnic Festivals and War Memorial). This exceptional setting is the front door to our city and offers the opportunity to attract mixed-use development that sets Milwaukee’s Lakefront in the 21st century. Whether in car, on bike or on foot, the experience can engage the visitor in participatory interactions with water elements, restored wetlands and natural lakefront habitats in a tempered zone softening the edge of Lake Michigan… Learning from other revitalized urban waterfronts, promenades and plazas with themed gardens can be designed for public education and enjoyment creating cohesive pedestrian and biking connections between lakefront cultural institutions and new development. Milwaukee’s environmental front door can showcase and increase the value and experience of new commercial, residential and business investments at our lakefront.” (STUDIO 1032)

Linda Keane of STUDIO 1032 characterizes the alternative proposal as a conscious effort to change the way urban development processes happen. “The intent was to open the legal and social discussion about policies for development at the lakefront at Milwaukee’s front door. We believe that private development must provide for year round public use at this juncture. To not do so would be to miss placing Milwaukee in the 21st century.” (Keane, L.N.)

What is really at stake in the design of the Milwaukee Ecological Gateway? If we believe that every enacted design decision is a choice about possible futures, everything. Interested readers may refer to the Milwaukee Journal Sentinel Business Reporter, Tom Daykin’s column Land and Space discussing aspects of both concepts and following ongoing news developments about the court and land use challenges related to the Milwaukee gateway within the context of Wisconsin Commercial Real Estate (Daykin).

Keane, L. and M. (2013) Scales of Engagement: The Joy of Design At All Scales STUDIO 1032. Milwaukee: The University of Wisconsin Milwaukee Press.