In the gallery of world statesmen of the twentieth century, Nelson Mandela occupies an exceptional position. His name will be forever linked with the struggle of the South African people to end apartheid, the coping stone of the racism and the injustices to which they had been subjected for so long.  However, this is not the heart of the matter. What sets Mandela apart in world history is the charity with which he led the struggle against apartheid and at the rendez-vous of victory, successfully barred the way to any form of recrimination or racial vainglory on the part of the victorious majority. It was the end to which every step in his long and eventful journey had been directed. 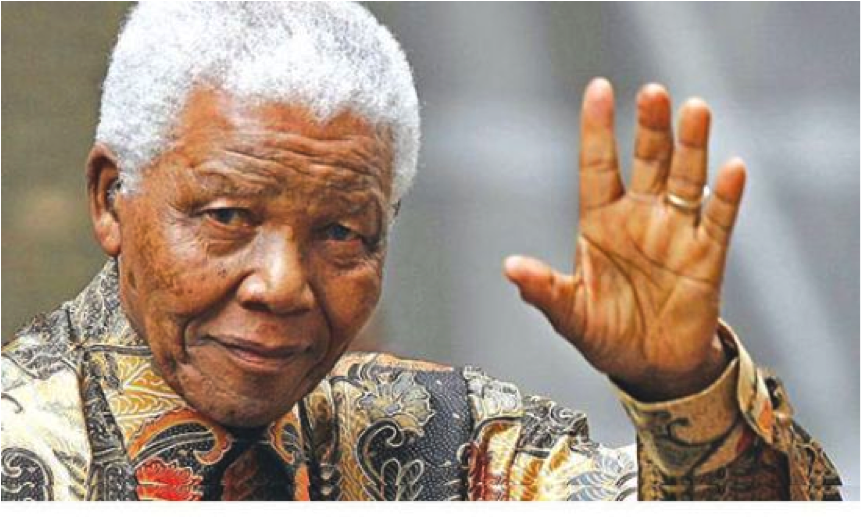 I will leave it to his countrymen and comrades who were by his side in the heat and dust of the struggle, to tell the world of the unique qualities of leadership he brought to bear; and confine myself to only what I saw of him as we worked together to achieve a negotiated end to apartheid especially in the wake of his release from prison in February 1990.

At the beginning of 1986, I visited South Africa with the Commonwealth Eminent Persons Group (EPG) appointed by Commonwealth leaders to bring about negotiations between the apartheid regime and the opposing political parties. Mandela was still in prison at Pollsmoor, and it was there that we met him. He had been incarcerated for 23 years, but the years of incarceration appeared to have left no mark on his spirit that I could detect. A number of other things also struck me about him: his personality was both warm and magnetic; he exuded a natural and effortless authority; and although already well into his sixties, he remained ramrod straight in spite of his unusual height.   Here, I concluded, was one of nature’s true aristocrats. I knew and felt that we were in the presence of a special being, and so when later I came to write about him, I recalled William Hazlitt’s essay on ‘Mind and Motive’ where he paid tribute to those “who walked by faith and hope,” who “live in the midst of arrows and of death” but on whom the world has no hold.

The apartheid regime’s Minister for Prisons, Kobie Coetsee, had requested that he and his officials be present at our meeting with the inmate Nelson Mandela. It was left to the two EPG Co-Chairmen and myself first to ascertain Mandela’s reaction to the request. I still remember the magisterial confidence with which he told us: “Let him and his team be at our discussions because there is nothing I will say to you that I have not told them”.

We briefed Mandela on the discussions at the Nassau Commonwealth Heads of Government Meeting that had led to the appointment of the EPG and its mandate. He listened attentively, and expressed wholehearted support for the mission. However, in the same breath, he stressed that while he personally supported the objectives, he could not speak for the ANC. Only the leadership in Lusaka could speak on behalf of the party, and he hoped we would go there to seek the party view. This epitomised Mandela’s unique humility and modesty. The world might regard him as the embodiment and conscience of the struggle but he insistently saw himself at that moment and always, as no more than an individual within the party, deferring to the party leadership at every turn.

In July 1990, four months after Mandela had finally been released from prison, I assumed office as Commonwealth Secretary-General. In May of the same year, during Mandela’s visit to Nigeria, we had begun to plan on how to work together to ensure the success of the negotiations between the South African Government and all other political parties. Over that period, a warm friendship developed between us leading to his writing the Foreword both to my Memoirs and to my biography.

It was in that May that we agreed that my very first official dinner in my first week in office in London, would be one in his honour to provide him with an opportunity to engage with major business companies with interests in South Africa. My wife and I hosted the dinner on 5 July 1990 at the headquarters of the Royal Commonwealth Society. Nelson, and his former wife, Winnie, attended, together with the representatives of 42 major companies operating in South Africa.

On another one of his visits to London, at the end of a lunch I hosted for him in my residence, Mandela made the following remarks, which again epitomised the special person he was. In a reminiscent vein, he spoke about the divisions within South African society that the Second World War had brought about, and the contrasting positions between his father’s generation and his own. The older generation was ambivalent as to which side to support. In their view, there was nothing to commend the white South African Government which was supporting Britain with the Prime Minister General Smuts in the forefront of the war effort. They could not overlook the fact that they had taken Britain’s side in the Anglo-Boer war only to have their hopes of a better deal betrayed. Mandela observed that his own generation took a different position. As they viewed the situation, the stakes involved in the Second World War were much greater than any local grievances, however protracted, and for this reason, they worked and prayed for a British victory. The higher good, not the parochial advantage:  that was what always guided Mandela.

In December 1991, the long expected and hoped for negotiations between the Government and the political  parties were finally launched at Kempton Park in Johannesburg within the framework of the Convention for a Democratic South Africa (CODESA). I sent a small but high powered group of senior Commonwealth Statesmen to the inauguration, not only to show support for the process, but also to underscore the importance that the Commonwealth attached to the success of the negotiations. However, just as the talks were beginning to make progress, a wave of violence broke out in many parts of the country, including a massacre of no less than six supporters of the ANC at Boipatong.

Following discussions with Mandela in Dakar, Senegal where he had been invited to an OAU summit meeting, I hurried back to South Africa to negotiate with the State President F W de Klerk and the leaders of the opposition political parties, for international observers to be sent to the country. As a consequence, the Commonwealth, the United Nations, the European Union and the Organisation for African Unity (OAU), in effect the entire International community, sent observers to contain and help end the violence.

If the violence had been allowed to subvert the negotiations, it would have been the end of everything that Nelson Mandela and his generation had worked for. To be sure, the struggle would have resumed, but in those circumstances it would have been practically impossible to keep it within the old, established moral perimeters: non-racialism and minimum violence. These were values that the ANC leadership had worked so hard to inculcate into black South Africans over the years, values that had been overwhelmingly accepted. The South Africa that might have emerged from such a renewed struggle would be one reared on dust and ashes and Mandela did not care to think of such a society. In this affirmation the real Mandela stood out. It remains an unforgettable image in my mind and, I am sure, in the minds of many others who were present at the Union Buildings amphitheatre in Pretoria on May 10, 1994 to witness Nelson Mandela take the oath of office as the first democratically elected President of South Africa. I still remember the tears of joy that rolled down the faces of so many at that wonderful occasion.

At the end of apartheid there were voices within the country that wanted some of the egregious racist criminals, in the days of apartheid, to be tried and punished. They may not have put their demands in terms of Nuremberg, but that was clearly the spirit of what they were asking for. The decision to replace a Nuremberg-style process with a Truth and Reconciliation process was a dramatic exemplification of the best of a national leader, allowing his head to see further than his heart when confronted with an intractable moral problem. The world has been several shades saner and safer for that rare example of statesmanship.

At the beginning of the twentieth century, another South African, Olive Schreiner said that “the problem which this century will have to solve is the accomplishment of this interaction of distinct human varieties on the largest and most beneficent lines, making for the development of humanity as a whole” Olive Schreiner saw a special role for South Africa in contributing to bring about this “interaction of distinct human varieties” and concluded that on the power of South Africans “to solve it regally and heroically depends our greatness.”

In Nelson Rolihlahla Mandela, South Africa finally found the man who gave the lead to the people of South Africa in all their “human varieties” to resolve the intractable challenge of apartheid regally and heroically. Nelson Mandela was a rare human being. What an honour and privilege it is to have been associated with him.

This tribute was culled from The Guardian Newspaper of Thursday, December 12, 2013 by Oliver Ngodo..

Chief Emeka Anyaoku, GCVO, CON was the third Commonwealth Secretary-General. He is a Nigerian of Igbo descent. Born in Obosi, he attended the University College of Ibadan, then a college of the University of London, from which he obtained an honours degree in Classics. One of the young men recruited into the Nigeria diplomatic service at independence, he went on to become the Commonwealth Secretary-General (1990-2000). He became the third secretary general at a time when the organisation was undergoing fundamental changes.