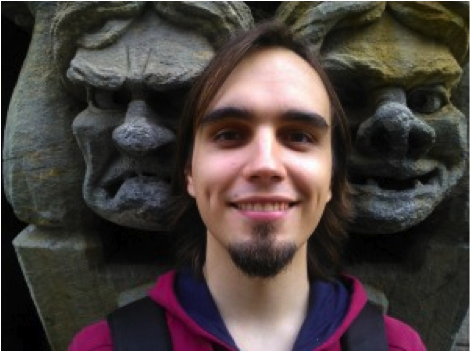 We live in truly interesting and turbulent times, as the events of 2014 show us. Geopolitical and sociocultural landscapes, gigantic tectonic plates of meanings and socioeconomic factors begin to move, bringing forth noticeable shifts and re-distributions of power relations. It is extraordinarily difficult to orient in the sequence of sociopolitical earthquakes and hurricanes, for the complexity of the situation beats all records and demands a truly panoramic vision. The panoramic vision itself, holistic vision, Integral vision cannot be divorced from practice and necessarily must be grounded in actual pragmatics. [1]

So, in the contemporary and dynamically fluctuating geopolitical landscape—whose side does Integral vision take?

Integral vision is a holistic and complexity-based [2] view on the world which gradually grows and develops in individuals and groups of individuals as a result of systematic application of the Integral approach to the world. One could speak in a more complex language and say that at a certain stage of its own development Integral epistemology starts to implement Integral methodology in order to enact Integral ontology. [3] In other words, consciousness, while being embedded in intersubjective structures, co-constructs existence using some practices of enactment, in turn influences consciousness. [4]

The Integral approach as it is, being an Integral method [5], or a set of practices of enacting reality, is utterly neutral. As a tool, or instrument, it takes no one’s side: everyone can apply it. However, the Integral approach itself is inseparable from both life conditions (being, or the ontological dimension) and subject who applies the approach (consciousness, or the epistemological dimension). Furthermore, our planet is inhabited by people who represent completely different levels of consciousness development, states of consciousness and typological predilections. All these people exist in specific life conditions [6] that uniquely shape the diamond of consciousness of the acting subjects (life conditions, if I am to use Jürgen Habermas’s terminology, include both lifeworld, or the actual space of interrelationships in culture, and material-technological base, or system). One should not underestimate the influence of being conditions on the trajectory of decisions that individuals and group constellations make. The “actual genesis” of world situation can be fully assessed only through accessing the dimension of history, or world-in-development, complexity factors and spirally unfolding sociocultural dynamics of growth, evolution and occasional regressions of consciousness.

Therefore, each subject is different in terms of its belonging to some structures and states of consciousness, typological attitudes, and distributions of AQAL-matrix in general. There is a great number of varieties of individual and collective attitudes in their dynamic co-relationship—in fact, they’re literally innumerable (although upon close analysis one could distinguish certain stabilizing constellations—embodied perspectives that follow particular patterns of reality co-enactment). Each subject and each group acts based on its moral attitudes which, in turn, are not given in a concrete and singular fashion and are determined by the degree of cognitive and moral maturity, not to mention various surface differences of typological-cultural origin.

This is the primary reason why it is extraordinarily difficult to answer the question of which side does Integral vision take. The answer is inevitably paradoxical: it takes neither side and simultaneously takes all sides. Integral vision is never disembodied; and it is embodied by a specific consciousness-being which co-enacts the world in dialogue with others by means of specific paradigms, or practices, based on the currently established habit of contemplating the world (which has its own long history of becoming). In the highest sense that is available to me right now, Integral vision takes the side of universal, or Kosmic, consciousness, for Integral theory develops Alfred North Whitehead’s notion of all-pervasive prehension—according to which non-anthropomorphic awareness (which finds its anthropomorphic shape through human beings) is the primordial and fundamental property of the universe, the universe that Ken Wilber, following neo-Platonists, calls with the broad term Kosmos. [7]

Advanced practitioners of the Integral approach who access nondual states of consciousness and transpersonal structures of consciousness tend to bring forth a perspective, according to which the Kosmos unfolds out of that which in the worldview of monistic (or nondualistic) Kashmir Shaivism—if we are to take as an example one of the meditative traditions which is very sophisticated in its nature and grounded in the complex philosophical apparatus and contemplative praxis—is called supreme I-consciousness that in the process of its unfolding [8] reflects in itself and brings forth the world of manifestation. The world of manifestation is inherently one with this I-consciousness and is an expression of its creative and generative force. This creative force, or drive, manifests as that which in Ken Wilber’s Integral theory is called the four quadrants with all the dynamics of levels, states, types, life conditions, etc. that unfolds within those quadrants. 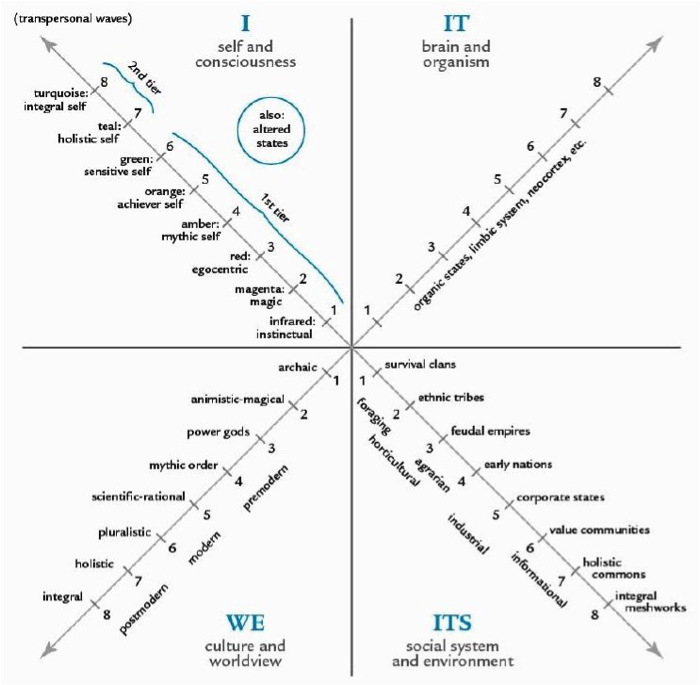 However, even if we do not follow such a complex point of view (which requires considerable amount of contemplative, structural, and experiential training) one can summarize the aforementioned with one simple observation. There are two foundational forms of using the Integral approach:

1. The Integral approach (as Integral Methodological Pluralism) can be used in order to enrich an already-formed viewpoint, or an embodied perspective of reality co-enactment, no matter what its history is or where it belongs socioculturally or geopolitically. As a methodological tool the Integral approach is neutral and takes no particular side; and the practice of the Integral approach gradually trains the capacity to remain in an aperspectival epistemological stance at first, and then, in the subsequent movement of awareness, to apprehend the entire field of consciousness-and-being in its multidimensionality, ranking all the phenomena based on the degree of the presence of the Beauty, the Truth, and the Good in and through them.

2. The Integral approach (as a tool of transformation, emancipation, evolution, and liberation) can also be used as a means to go beyond the limitations of a specific context and grow into an omni-human, planetary, and, subsequently, kosmocentric, or universal, panorama. The Integral vision, that emerges in this case as a result of many years of practice of implementing the Integral approach, takes the side of all sentient beings simultaneously. At the same time in its specific manifestation the Integral vision is always embodied in beings who have to face various particular probability distributions in the AQAL constellation (simply speaking, with particular life conditions that have their own histories) and the necessity to perform pragmatic actions that in a short-term, mid-term, and long-term perspective [9] generate an integrated emergence of greater Goodness, greater Truth, and greater Beauty.

Skillful and mature application of the Integral approach is grounded in (1) contemplative apprehension of the complex-systemic and transpersonal pragmatic constellation on local, regional, and global levels (the component of knowing); and (2) contemplative action—or, to be more precise, co-enactment—that unfolds in the magnificent panorama of being that is brought forth this way (the component of acting). Thus, by attempting to grasp the phenomenon of Integral vision and the Integral approach from the highest vantage point that is available to me right now, I say that the Integral approach does not take sides—it sides with neither North nor South, neither West nor East, neither premodernity nor modernity nor postmodernity. The Integral approach doesn’t belong exclusively to any side in particular; it is brought forth in order to bring goodness (in the broadest meaning of the word) to all sides, allowing each side to gradually find its healthy worldspace in the commonwealth of living beings.

Representatives of all possible stakeholders and sides can apply (or at least attempt to apply) the Integral approach as a neutral but psychoactivating tool; and at the same time it is important (when your consciousness has gradually developed the capacity to grasp such a perspective as a result of long-term integral practice) to aspire to act not only out of personal, local or regional interests, but also out of a planetary perspective that is attuned to the evolutionary gradient of the Kosmos itself. To do so is in your own best interest!

[1] In the actual pragmatics of the currently available distribution in the AQAL matrix.
[2] And also transpersonal in its highest manifestation.
[3] This is the famous post-metaphysical triad of “epistemology × methodology × ontology” which Ken Wilber refers to in Integral Spirituality and Sean Esbjörn-Hargens refers to in his works. See also Wilber’s “Response to Critical Realism in Defense of Integral Theory” (2013).
[4] Integral vision which reached transpersonal maturity recognizes that consciousness and being are not-two, or a nondual dance and life dynamism.
[5] To be more precise—being an Integral Methodological Pluralism.
[6] Life conditions is a term from Spiral Dynamics Integral which, in my opinion, emphasizes the importance of the ontological aspect and pragmatic realism. See Don Beck, Chris Cowan, Spiral Dynamics.
[7] Kosmos is not merely physical cosmos. It is the All-Unity of the realms of matter (physiosphere), biological life (biosphere), mind (noosphere), and spirit (pneumasphere) which is holarchically and ecstatically vibrating with the impulse of creativity and the evolutionary drive.
[8] Which involves involution and evolution.
[9] That is, I refer here to a proactive practice of that which in the action-inquiry approach of Bill Torbert is called triple-loop feedback. See Bill Torbert et al., Action Inquiry.

Eugene Pustoshkin lives in St. Petersburg, Russia. He currently serves as the Chief Editor of Eros and Kosmos (see: http://eroskosmos.org/english), a recently founded Russian online magazine; he is also the Bureau Chief / Associate Editor for Russia at Integral Leadership Review. A few years ago he graduated as clinical psychologist from St. Petersburg State University. He translated several books by Ken Wilber and works of other Integral authors.