By Way of Introduction 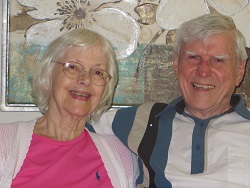 This sketch is intended as an introduction to the new therapy my wife Millis and I developed to treat her gene-driven Huntington’s Disease (HD). It is based mainly on Bruce Lipton’s pioneering epigenetic research; we call it Integral Epigenetic Love Therapy 24/7. After two and a half years of intensive application 24/7 we report that our therapy has reduced her heretofore thought incurable HD, inherited from her father, by an estimated 85-90%. Please note that while one case does not make a scientific study, Millis has a dramatically new, almost symptom-free, happy outlook on life.

Huntington’s Disease (HD) is a devastating genetically inherited progressive neurodegenera- tive disorder that affects muscle coordination and leads to cognitive decline and psychiatric problems. Symptoms may include involuntary physical movements, irritability, apathy, anxiety, depressed mood, obsessive-compulsive behavior, changes in libido, and psychosis. There is no record of an HD patient experiencing spontaneous remission. There is no cure for HD.

Integral is defined as including everything essential to a whole functioning psyche and body, for example, anima and animus as equally important complementary opposites; self-management skills, intellectual, feeling-emotion, sensation, intuition, and feedback receptiveness and processing skills.

Epigenetics is the scientific study of how changes in environment have shaped genes, hence evolution, over millions of years (Francis 2011). Contemporary epigenetics is based on recent scientific research findings, e.g. cellular biologist Bruce Lipton (2006) and others, who have found that some aspects of human genes change profoundly, for more or less health or ill, with changes in their environment.

Love has been shown in scientific studies (Lipton 2005) to be not just a pleasurable emotion but an equally important powerful healing agent, for example, giving and receiving expressions of love elicit healing biochemicals in one’s body affecting genes, e.g. oxytocin and endorphins. In contrast negative expressions such as fear, hate, disgust, etc. if misused and/or overused, may result in emitting biochemicals, e.g. cortisol, damaging to body tissue.

Therapy While far more time is required than in traditional talk therapy, our survivor-centered

therapy emphasizes experiential interpersonal expressions of how and with what ongoing results we, as HD survivor and caregiver, experience our mutual love within a harmonious, aesthetically healing physical environment every moment, consciously and subconsciously, around the clock 24/7.

I first became aware my father had an active Huntington’s Disease gene when as a teenager I observed his involuntary arm movements (chorea). I first became aware I had inherited his HD gene when at age sixty-two (0l/98) my DNA test at Bay State Hospital showed positive. But I still didn’t have observable symptoms common to HD patients until later when my HD symptoms – involuntary movements, cognitive and emotional issues – became gradually more obvious to my husband Bob and others who know me well.

Unable to find acceptable professional help closer than Massachusetts General Hospital in Boston, my caregiver-husband Bob and I went there to participate in clinical studies. Finding that clinical studies would not lead to treatment and progress review, we decided to engage HD expert Dr. Rosas’, neurologist-psychiatrist at Mass General. With no known cure we felt we were in relatively uncharted waters. Reducing that uncertainty, Dr. Rosas’ first intervention proved beneficial. She prescribed one milligram per day of the psychoactive drug Risperidone, starting in January 2012.

Collaterally, Bob shared leading-edge epigenetic studies with me as they emerged. Among those were pioneering studies by Stanford research fellow, cellular biologist Bruce Lipton (2005) who had made early discoveries about how environment – individual mind-body, sociodynamic, and ecosystem – shapes our genes (epigenetics). Bob and I discussed the possibility of altering my HD gene’s psycho-spiritual-physical-social environment by first returning our interpersonal mutual empathic relationship to a quality commensurate with my pre-H.D. onset level. We began our environment enrichment endeavor, gradually stepping up to a more aesthetic, harmonious physical home environment.

Surprising us, during the following six months my involuntary movements (chorea) began to gradually disappear along with some of my cognitive and emotional symptoms. My HD symptoms stabilized enough so that we were able to gradually introduce enhancements to the already existing loving environment we had going in our marriage prior to the increasing activity of my HD gene. Our relationship deteriorated badly. Not realizing it was my HD gene that was causing my growing irritation with Bob I erroneously thought we needed marriage counseling.

Meanwhile, Bob and I continued to raise the quality and intensity of our interpersonal love environment, e.g. empathy, active listening to each other, informally, day by day, as we went along. By January 2013, people who knew me when my HD symptoms were more noticeable, like participants in our New Options Community Group, remarked how my symptoms, including involuntary movements, diminished, then “disappeared”. “Wow, you look good, Millis!” or something like that, has become common.

As a result we had success in reducing my HD symptoms – physical, cognitive, and emotional – to an imperceptible level through integration of medicine and Integral Epigenetic Love Therapy 24/7. After a progress review in June 2014 Dr. Rosas authorized reduction of Risperidone to .5 mg per day (if I so choose). With this success to date Bob and I are committed to continue our Integral Epigenetic Love Therapy 24/7 until death do us part.

This document may be copied providing customary citations are shown. Thank you