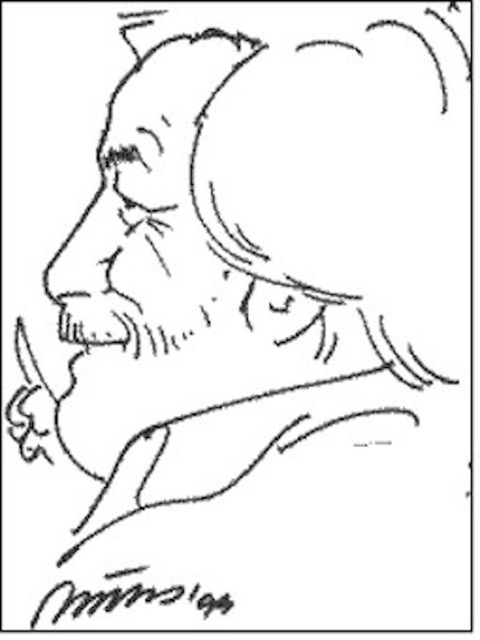 “I have become increasingly convinced that contextual intelligence is key and every bit as important as every other kind of intelligence. To support a point you made a moment ago, when I say context I think of it as a series of concentric circles. I will often ask people to imagine themselves throwing a stone into a pond – you will see concentric circles. The first or inner circle is the immediate context, say, the small group that you’re working with or in. Then, outside this circle is a slightly larger circle. This might be the organization within which the small group is embedded. Outside this circle is where we are now – what is this moment in time and where on a larger scale are we located and so on. So context is a many-layered series of concentric circles, each of which pertains to patterns of dominance and deference.”

Kellerman’s work on leadership is important for a number of reasons, e.g., her position of influence at the Harvard Kennedy School and the prominence of her writing in the field of leadership. This writing has shifted some of the attention away from trait and hero oriented theories of leadership to relationships and context. Her work is an example of why Integral Leadership Review has embraced work far beyond the boundaries of Wilberian integral theory.

I have described ILR as seeking to identify the many tributaries that contribute to the river of an integral understanding of leadership, ultimately flowing into the ocean of sense and meaning making from which we take action through leadership to address the many challenges we face on this planet. That means that we embrace the spirit of Ken Wilber’s comment that no one is smart enough to be wrong all of the time. This is one of the strength’s of Wilberian integral theory: it seeks to find the value added of all perspectives by providing a framework that allows such diversity not only to co-exist but also to integrate in a transdisciplinary approach of sense and meaning making and, thus, action.

Kellerman’s work is an example of the kind of intellectual evolution that results from such efforts at integration. In the case of her current book, she is stretching her work to support an appreciation of leadership that includes not just individuals, but culture and systems, as well. She is showing a path that may help us move past the old paradigm of leadership in which so much of the academic and popular literature on leadership is built. I would argue that we need a new paradigm, one that is more integral in nature, if we are to address the challenges that Kellerman discusses in the interview. Her most recent book is a step toward this new paradigm.

Something that was important in her comment about context quoted above is that in addition to concentric circles of proximity, she refers to layers. A concern that I have about this new book is that she discusses what is in the concentric circles, but does not attend to the idea of layers in a way that is obviously based on a stage or level or “layer” model that reflects her concern for culture. She seems to think of layers in terms of complexity and scope. There is no overt developmental framework to suggest layers. At best, layers are suggested in her discussion of classes. At worst there seems to be an assumption that no developmental framework is necessary for her analysis.

In addition, it was of interest to me that in at least two parts of the book she is explicit about her choice of terms and why. I have argued, including in my interview with her, that we need to use clear distinctions among terms like leader, leading and leadership. Kellerman, for example, begins with clarification of the use of the term follower. She uses it because it is an obvious antonym for leader. Why she would turn to “opposites” is not clear. And it is not a useful approach in that leader and follower are roles; she points out that individuals shift between these roles. They are not opposites any more than manager and employee are opposites. They are roles in a system of roles, in a culture of roles, in an individual mental map of roles. Individuals take action based on an understanding of contextually situated cultural definitions and boundaries of action options for individuals in those roles. We would not say the tire of a car is an antonym for the wheel of the same car. They are two parts of a system.

Kellerman acknowledges alternative terms, like my preferred “stakeholders” and other terms such as participant and team member. She continues,” …the words leader and follower are fungible. Sometimes leaders follow, sometimes followers lead.” And thereby she misses the importance of considering leader and follower as roles, not individuals. She goes on, “…for the purpose of this discussion the follower is simply the other—the person or persons the leader must somehow engage and include if he or she is to control the action.”

And thereby hangs the assumption in the mental model she brings: these relationships are about control among individuals. I would suggest that control is about management, not leadership, and if we treat the two functions as the same we don’t need both of those terms.

But I appreciate Kellerman’s apparent intent: to acknowledge the difficulties the English language poses for us in talking about social phenomena like leadership (and followership, etc.). This is why I propose beginning with clarification of the distinctions among terms that recognizes the labels we have assigned to individuals represent only temporary roles that the individuals perform, sometimes repeatedly over time, but never, as Joseph Rost noted, 24/7. Kellerman opened the door for such an approach, but chose to return to the very same paradigm of leadership that I maintain has kept us stuck in the quagmires of the leadership industry she so articulately identifies in her work.

And what of her checklist? Hers is a very helpful analysis of key variables that are relevant to the challenges of LEADING in contemporary America. Not only does she identify the elements within the United States, e.g., economic and political and cultural, but in the relationship between the United States as a system and the meta systems of world economics, culture and politics. Her analysis is relevant to leading in teams, organizations, communities and the nation. Perhaps the most interesting theme that runs through this discussion is the degree to which so many have lost confidence in individuals who step into leader roles and their capacities to correct the difficulties created within the systems we have evolved. These systems are failing us… or we acting more independently of them.

“In American religion, as in every other realm of American life, followers are less inclined to follow and more inclined to act as independent agents. This means that whatever American leaders might or might not believe in private, in public they are less able to use religion in order to enlist followers in their personal, professional, and political crusades.”

What we might add is that there are still minorities who are mired in Blue (Spiral Dynamics integral) who have the ability to influence others who have shifted their centers of gravity. Some have shifted to Red in order to “take charge” of their lives in the face of abandonment by religious and political leaders. The demand for weapons is not based on a religious ideology, but a secular one. Some have shifted to Orange in the hopes of taking initiatives that will give their lives meaning and their families the means to a desired lifestyle. In either case, be it political or religious Blue, the rules are not held in the esteem they once were and those in leading roles in these realms are more and more subject to suspicion, distrust and scorn.

She also points to the intensified competition among interests within American society and comments,

“… the problem of the problem keeps repeating itself. Here’s what I mean. The analysis of the problem, whatever the problem, is, typically, not only well intentioned but well executed. But the solutions to the problem, equally typically, are lame, not up to the magnitude of the challenge at hand. What I am suggesting is that by always implying that there are remedies for what ails us might be misleading. Maybe some problems have no solutions. Maybe some problems cannot be fixed, or, at least, they cannot be fixed in any way that in the current climate, the current context, is politically, economically, and socially feasible.”

Not only are many problems complex, but so is the American society that must cope with them.

These and the many other problems or challenges faced today constitute the changes in the context in which individuals seek to lead. While we may come up with wonderful lists of traits, competencies and skills, while training and educating people to acquire them, they fail to help us meet the challenges faced by individuals in leader roles. And here Kellerman makes an important point: the context for relevance is critical. While the power and influence of individuals in leader roles has diminished, turning to collective approaches, such as teams, may have advantages, but also disadvantages. Not only have we not mastered the issues of individuals being effective in leader roles, but we have not mastered the effectiveness of collective decision making, problem solving, and action.

In sum, Kellerman is always worth the read. This work is no exception. She provides an important tributary to a more integral approach to leadership. And she reminds us so well that it isn’t just about heroes or even control. It is about individual and collective in a complex context where the multiple variables of living, being and doing keep shifting while increasing the challenge of effective leadership.