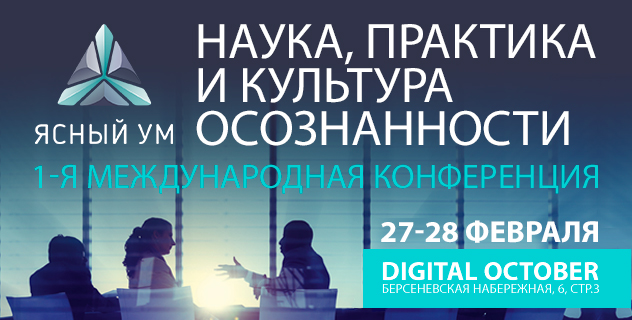 To me the Crystal Mind Conference is one of the brightest and most interesting consciousness-related events in Russia. For my country, it is one of the first attempts to collectively pioneer mindfulness in a systematic and professional manner, with skillful media coverage, and a broad range of speakers-participants, attempting to jumpstart a mindfulness revolution here.

One of the features of the conference is that mindfulness is understood in a broad meaning of expanded or deepened awareness (in numerous meanings of the latter term) and practices of such expansion. Many speakers of diverse backgrounds are invited, and not all of them are mindfulness teachers (as in meditation). Some of them bring what Daniel Siegel calls cognitive mindfulness to various subjects related to society, business, management, leadership, philosophy, etc. Incidentally, Dr. Siegel’s webcast, alongside with some other interesting keynote speakers (such as Claudio Naranjo, B. Alan Wallace, and others), is announced by the organizers.

In the upcoming—and also, hopefully, future—Crystal Mind conferences there is going to be a special section devoted to discussing Ken Wilber’s Integral Approach. Together with my colleague and friend Victor Shiryaev (who is also one of the proactive leaders of Russian mindfulness movement who is helping this wonderful event to happen), I was invited as a host of the roundtable discussion about Integral.

There will also be a section on the topic of “Mindful Cities,” which in many ways will be touching (implicitly and explicitly) on Marilyn Hamilton’s Integral City framework through Lev Gordon’s Living Cities initiative—this initiative received support from the Russian government. (Lev is going to participate in our Integral section as well; see his invaluable contributions to this Special Russia Issue.)

My sincere belief is that the Integral Framework, with its strong knowledge of both cognitive and contemplative traditions of East and West, its Integral Methodological Pluralism, and its post-postmodern inclination, is probably one of the best operational systems that allows thorough understanding of all layers of the entire spectrum of phenomena related to mindfulness and awareness.

And, since Integral perspectives will be present at the conference and our friendship will hopefully deepen, I thought that it would be great to include information about this event to our Special Russia Issue. I asked the organizers to write a short description of what motivates them and what sort of activities they are doing. — Eugene Pustoshkin (February 25, 2016)

Community 2.0: The Crystal Mind Conference and the Mindfulness Movement in Russia 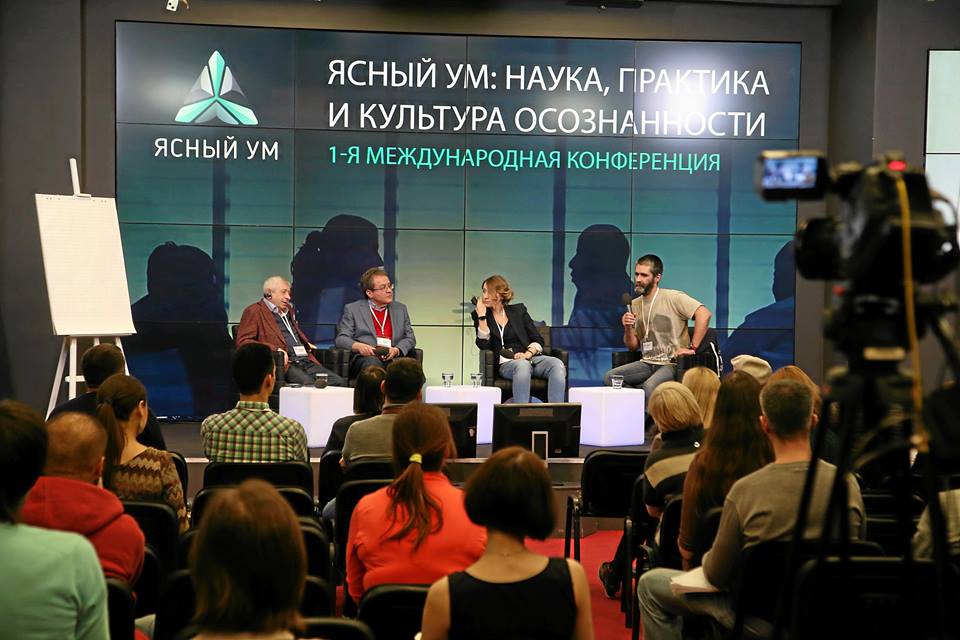 Our society is changing drastically under the influence of technologies. The flow of information holds people in chronic captivity, distracts from independent analysis, and grabs their attention. But at the moment of crisis there is a question that arises practically for everyone: “What do I do? How do I live?”

The effect of “frustration” becomes universal:

With this society is not interested in its participants to be conscious, on the opposite: the more people are acting automatically, the easier it is to manage them. What can we do in such a situation?

“For the last 30 years while engaged in internal work, I’ve repeatedly become convinced of some strange closeness of different groups, developing and living our common problems: search for their interior support and reasons for their own evolution,” mentions Anatoliy Prokhorov, producer of famous Smeshariki, one of the masterminds of Russian academy of Internet. “Building a community of mindfulness practitioners with an agenda of constant and various meetings with each other—as the dominant idea of its activities!—will gradually create our openness to each other and community, which each of us lacks in our internal work.”

The concept of “mindfulness” became popular quite recently; it is not surprising that this specialized community is only at the stage of origin. Every person practicing mindfulness needs support of like minded people. The 1st International Conference “Crystal Mind: Science, Practice and Culture of Mindfulness” (Moscow, Russia, February 27–28, 2016) and subsequent conferences should become a space which for the first time would unite people of different backgrounds and directions of activities. And according to the idea of its hosts, it would be good to make these meetings systematic. Why?

“There are people who are ready for an increased degree of change, for an accelerated pace of civilization. And there are people who are not ready and they suffer. I don’t think one should suffer if it is possible to avoid such suffering,” says Boris Ryabov. “What can we do for it? What is there in a human being, which allows him or her to take uncertainty calmly? It is an inquiry into oneself. Actions based on at least some understanding of oneself. And the time for it has come!”

The purpose of such events is to reassemble the society by building “community 2.0” or “society of interiorly adult people”. Its assembly is a long and absolutely unknown process both in terms of required efforts, and in terms of results. However, it could be that the community of mindfulness practitioners—and, especially, teachers—is that which can begin such a process.

Aleksandra Galitskaya is the founder and CEO of the company Green Team, business coach, a host of the conference “Crystal Mind.”

From 2008 I am involved in implementation of federal and international social projects.

In 2010 I faced professional and emotional burnout syndrome with myself and with my colleagues and started to study Russian and foreign experience of solving such problems.

In 2012 I founded Green Team, first company in Russia which is professionally involved in introduction of a healthy way of life into corporate environment.