From 27 to 29 September 2012, a community of scholars and practitioners gathered in Berlin for the SIETAR 2012+38 forum. What drew them together was their strong desire to help bring about Global Integral Competence and Cosmopolitan Communication.

To invite the leading edge of practice and thought to become present, we imagined a world, in 2050, where integral consciousness had become the average level of development of individuals throughout all cultures, and where integral competence had found its way into our brain, mind, culture and systems. We imagined that people would be versed in cosmopolitan communication practices, which ““enables coordination among groups with different, even incommensurate, social realities.”(Pearce, 1989, p. 169)

It is hard to express in words what we made together at this conference. The conventional style of reporting will not do. Fortunately, the orga-team invited Mathias Weitbrecht as a visual facilitator to make a map of the conference. The richness and interdependence of the themes and ideas that wove together in recurring and recursive cycles over the course of the days is well captured in his drawings. You are invited to further explore it here: http://www.sietar-forum-2012.de/page/art/141/visualization

Figure 1: Visualization of the forum

What form or words might convey and amplify some of the learning and discoveries that we experienced at the conference? Instead of clear answers, we offer a bricolage of four short personal stories from organizers and participants who each share the conference experience that struck them most.

My own story concerns the emergence of we-space as it is needed. One of my contributions to SIETAR was to facilitate the half-time dialogue. For this, I used the metaphor of a jazz club. This jazz club, the in-groove, is situated in the CMM Institute for Personal and Social Evolution’s project Cosmopolis 2045. This imaginary city of the future explores a society that has mastered cosmopolitan communication. The in-groove jazz club at SIETAR was meant as a first experiment to bring together musicians and dialoguers and help them apply principles from jazz improvisation to questions that matter.

I used Juanita Brown’s World Café as the design, and provided the instructions to the participants as if they were jazz bands. I could draw on seven years of experience with a jazz band, playing principles form the scholarly field of Organizational Improvisation and four years of PhD research into its working. But nothing could prepare me for the beautiful emergence of my own ‘band’ at the conference. 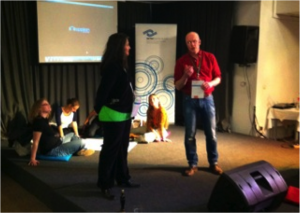 In preparing, I had asked Kazuma Matoba, who chaired the conference to offer me assistance with facilitating this dialogue. On the day of my work in Berlin, I asked Kazuma who would help me out. Quickly, I was connected with Rita, Veronique, Brenno, and Olga, and a few minutes later we sat down at a small table where I explained my intentions. As I started into a turn explaining the principles of jazz in theory, Rita breaks in and says: “Oh I get it, and I would love to co-present this with you, I love and get jazz, is that ok for you?” I look her in the eye, and I see her understanding of jazz and improvisation. “Do you need more structure than this? “I ask her. “No, we can do it” she says. A few minutes later, we have the whole team aligned around a minimal structure, where Rita and I will improvise the briefing together. Two hours later, we are on stage, improvising, finding our groove, and it just works.

What struck me most was that the band came together as it was needed. There are always musicians who are willing and ready to play, whether with instruments or with words, it works out if I let my controller and perfectionist relax. It was a great performance with all the tensions, imperfections, and groove that goes with jazz improvisation. It was a grand opening of the in-groove jazz club, and judging by the mindmaps that the participants drew, a lot of knowledge converged and got shared. As of this forum, I will always ask myself: who would join the band today? Where is our stage, and what can we let unfold.

As a chairman of SIETAR Forum I had a question whether participants can understand the meaning of this event – to research a combination of integral theory by Ken Wilber and cosmopolitan communication by Barnet Pearce for developing “global integral competence”. Most of the participants, especially the members of SIETAR don´t know about these two concepts well. But our goal was not to let them understand the theoretical collaboration between these two concepts, but to experience essences of cosmopolitan communication through keynote lectures, input dialogues and many workshops.

This experiment was very successful because most of the participants are now so motivated that they want to continue to research cosmopolitan communication based on their knowledge and experiences gained during the three days.

On the third day I had to facilitate a large dialogue process with more than 150 participants. Prof. Claude-Hélène Mayer, co-facilitator, gave a short input story concerning the healing communication. This strong but short and pregnant input impressed many participants sitting in the circles and a kind of coherent energy emerged. So I did feel very strongly in the center of the large circles. The dialogue process went on very slowly with comfortable silence and we all were competent listeners who encouraged us to speak sincerely. Surpassingly three young conference helpers who were not participants talked about their positive impressions about our experiment and dialogue process. After a while I was so struck by one lady who said “We are now practicing cosmopolitan communication!” that I felt strongly the power of dialogue. 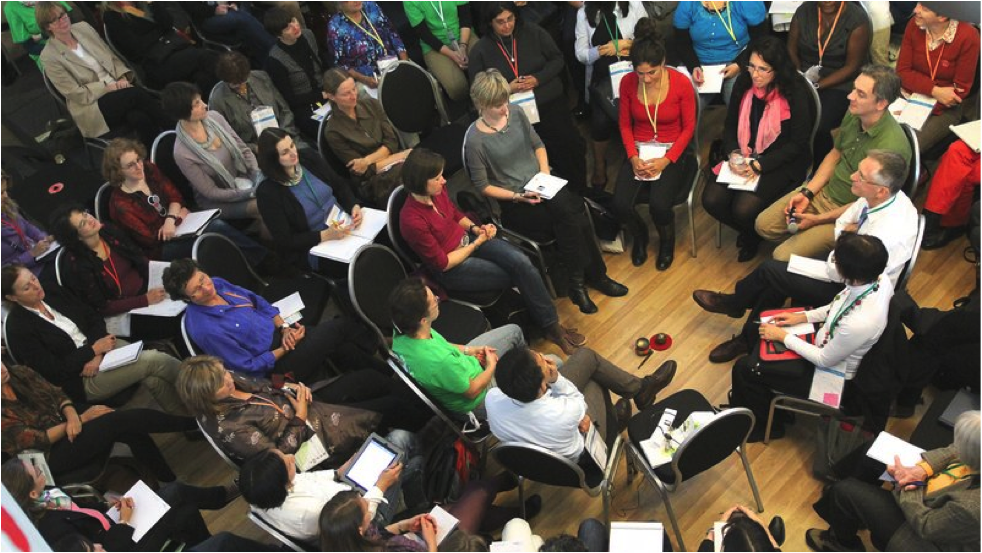 Some workshop-facilitators were asked to offer in-depth workshops by their participants. Many participants want to build a community with the topic “Global integral competence”. Now there is a small group that is planning a master course for “Global Integral Competence for Cosmopolitan Communication” at one University in Europe/USA.

The SIETAR 2012+38 “Cosmopolis” format presented us with a provocative question: what could our intercultural “social world” look like by 2050? Thinking about this question in terms of the Coordinated Management of Meaning (CMM) theory developed by the late W. Barnett Pearce added the equally intriguing dimension of how we might co-create this social world together in communication with each other. I had originally thought that my contribution to this process of envisioning was to speculate on ways that network forms of communication might open up pathways for unexpected connections, perhaps using technologies and means of communication that have yet to emerge.  However, David Willis created a novel way to look at this complex and nuanced context, changing the focus to “New/Old Paradigms of Communication in Action”.  This reminded me that one way to think of past and future is as cultural constructions, and that to see further ahead we might need to look further back.  This inspired me to use the lens of CMM to help understand how a profound social (re)construction of reality might have happened in the past.

Since we would be meeting in Berlin, it seemed very much appropriate to draw on an example of European social systems and values intersecting with those of the newly emerging United States, and I went back to 1774 to take a look at the ways this intersection was embodied in George Washington, leader of the American Revolutionary forces, and Baron Friedrich von Steuben, the Prussian officer who helped to train and organize his army as his Inspector General.

We had a lively discussion (in which not everyone agreed) of the ways in which the old Prussian values of duty, honor, and integrity could be seen as being transformed into a “discipline” that in turn became “liberating” when it was freely chosen, and then used to earn the independence and freedom of a new continent.  The embodied dynamics between Von Steuben and Washington later evolved into a system (and a moral code) which works outside of the formal Army organization to teach, inspect, ensure accountability, and promote the dignity and respect of each member of the army.  This, over time, then resulted in “emergent properties” like self-sacrifice, loyalty to each other, and personal courage, which become reinforced as part of a new culture.  This presentation was one contribution to our part of the SIETAR Berlin conference, which was about the lower right quadrant, or the ”systems” aspect of cosmopolitan communication. 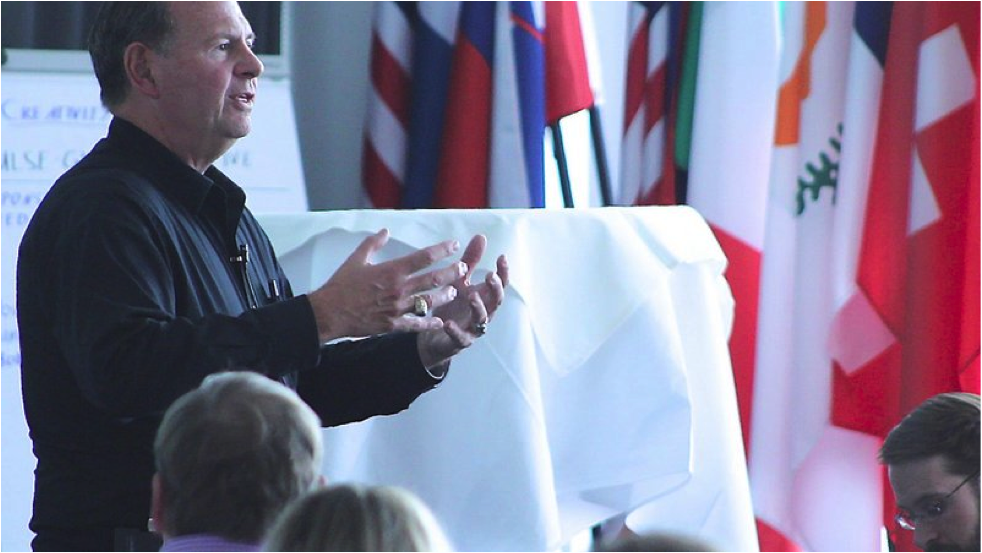 We were joined in our workshop by the current Baron von Steuben, along with his son who is doing his law residency in Berlin.  The Baron pointed out that some in Europe now thought the old Prussian values to be “warlike” and antiquated, but made his case for their renewal and transformation in a new context of personal freedom and openness.  The younger von Steuben was engaged by spirit of “becoming” embodied in our SIETAR conference, and noted as an analogy that he found the city of Berlin to be exciting and dynamic precisely because of its imperfection, and the simultaneous existence of remnants of its past which were not yet fully reconciled. “In ten years, perhaps Berlin will be like any other large city in the world, and therefore not as interesting” he added.

Beth Fisher-Yoshida served as the discussant for the workshop in which my paper was presented along with Sergej van Middendorp’s.  Sergej, as noted earlier, took the perspective of improvising with metaphors, including jazz music and architecture, as a way to “see” emerging culture through different patterns of communication and minimal structures.  Looking at both presentations with the lens of CMM theory, Beth summarized the following seven themes for our learning together in this workshop:

Kazuma Matoba was born in Kobe/Japan and studied Linguistics in Tokyo. After teaching intercultural communication in several Universities in Japan he came to Germany to get his PhD in communication science in Duisburg. He was then scientific staff in intercultural communication and diversity management in the department of economics and business at Witten/Herdecke University in Germany. He also offers intercultural/diversity trainings with dialogue process for European and Japanese companies, NGOs and Universities. He is co-founder of International Society of Diversity Management, free intercultural Waldorfschool Dortmund, Chairman of board SIETAR Germany (Society for Intercultural Education, Teaching and Research e.V.), and academic director of competence center “Culture & Diversity Management” at Witten School of Management. He is living in WItten with two children, his ex-wife and one border collie.

Barton Buechner has over 30 years of experience in navigating the complexities of large organizations at the local, state, and national level. He has served at various times as a director of marketing, health care manger, and military assistant to the Inspector General of the US Department of Defense. He is now completing a Ph.D. in Human and Organizational Systems at Fielding Graduate University’s school of Human and Organization Development, with research and dissertation work focused on the phenomenon of “contextual mentoring” of non-traditional students on college campuses.

Sergej van Middendorp is an independent researcher, developer and consultant. He is a co-founder of design consulting network PerfectArch, and the producer of jazzinbusiness. Currently he is enrolled in the Ph.D. program in Human and Organizational Systems at Fielding Graduate University’s School of Human and Organization Development. He is working on an action research project that helps us make sense about how our conscious and unconscious improvisations with conceptual metaphors become embodied in the systems that we are creating. His research is supported financially by  six Dutch entrepreneurs: Kalo Bagijn; Roland Hameeteman with e-office: www.e-office.com; Johan Burgemeester and Ronald Heerema; Herman van Middendorp; Ronald van den Hoff, with Mindz: www.mindz.com; and Charles van Gogh with Mise en Place: www.mep.nl.