Mexico from an Economic Miracle to Potential Failed State

The problems we confront are not due to our failures, but to our previous success
Don E. Beck, PhD

“We do not deserve this country,” a young businessman said to Dr. Don Beck back in April 2007, when we (Dr. Don Beck, Karina Eichner and I) started the whole country transformational project recently named Orchestrating Mexico. The young and wealthy businessman referred to the long period of time (70 years) that the PRI (Institutional Revolutionary Party) governed in Mexico. Dr. Beck listened to him very carefully and replied, “Well, that happened because, THAT was exactly what you needed as Mexicans”.

We were in Mexico City with a group of six young businessmen. After Dr. Beck´s words, there was a long silence in the room. “How come?” replied the same young man, “How can you say that? We as Mexicans do not deserve that kind of corrupt and inefficient government”.

This conversation was held with elite Mexicans, young people who studied at Harvard or Yale or Stanford. The same logic is also present in several layers below in the social classes of Mexico. We act most of the time as victims. But there are some interesting events in the recent history of Mexico, in fact as Hansen (1974, p.1) mention in his book: “Since the mid-1930´s the Mexican Economy has grown at an annual rate in excess of 6 percent, an accomplishment often referred to as the Mexican “miracle”. To maintain this pace for thirty-five years may not be miraculous, but by any standard is impressive (see Table 1)

But this long period of sustained growth was not enough to generate the conditions to have such growth in present times. We have to consider that in a country like Mexico, we have to separate the “engines of growth” from the “engines of distribution,” The latter is one of the keys to development and a hot issue in all the countries of the region.

Daniel Chiquiar and Manuel Ramos-Francia (2009) report in Chart 1 how some Asian countries, despite how far below the Mexican and Latin American countries performance was, by 1986 surpassed Mexico in a very impressive way. Also, in the same chart it is clear how Mexico lost its pace from 1980 to 1990, a period that is called by some economists as the lost decade (Meyer 2010). 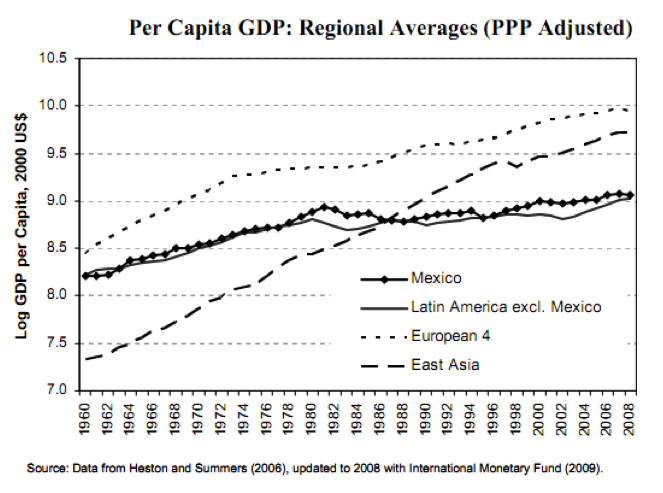 On the other hand, The National Institute for Statistics and Geography for Mexico, (2011) developed a very interesting tool that helps us to understand how much the Mexican economy is linked to the USA economy. It provides several indexes starting in January 1980 to December 2010. Chart 2 shows the starting point for Standard & Poor 500 index (A6) and three Mexican indexes: Economic Activity (C1), Industrial Activity (C2), and the Retail sales performance (C3). 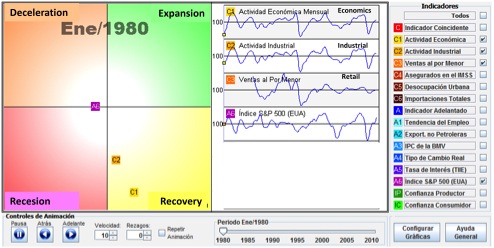 Chart 2: The Mexican and US Economies

Let us review the path followed by each indicator in periods of ten years. 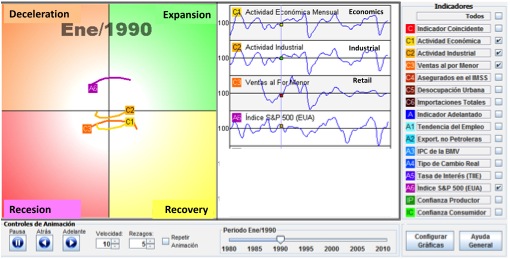 Now 10 years later we can see how the Mexican indexes are “following” the S&P 500 index, so we (as Mexicans) have clear warning signals that should help us to anticipate a potential crisis. 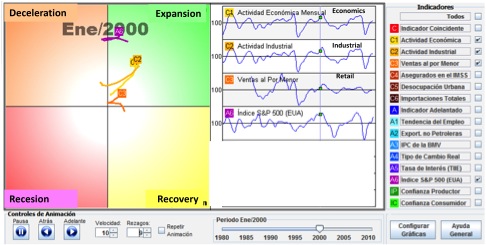 Now we can discover that the retail sales in Mexico seems to be a better predictor for Mexican performance related to the USA S&P 500 index. Now consider April 2008. 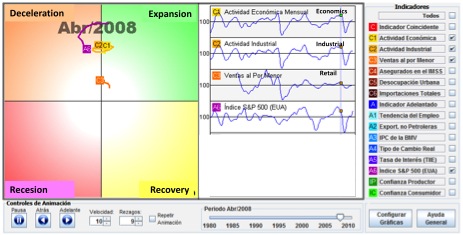 See how fast the retail sales index responds to the rapid deceleration of the S6P 500 index. If the Mexican Government and also Mexican citizens looked at the industrial and economic indexes they would think that Mexico was in an expansion zone. Now consider December 2008. 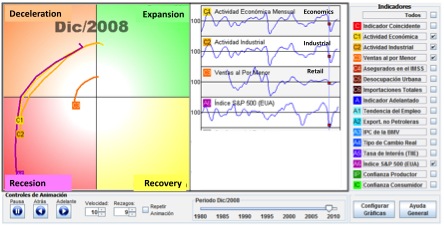 Here we can see how fast the S&P 500 Index went “south,” but now with a clearer reaction of the Mexican Industrial and Economic Indexes. Amazingly, the Retail Sales Index keeps pretty “stable.” Now let´s move to October 2009. 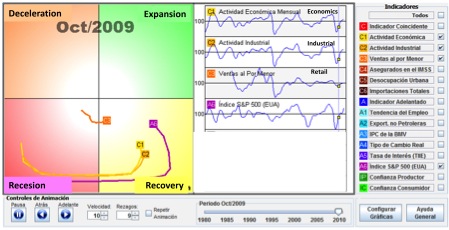 We could derive a preliminary conclusion that in recession and recovery stages the economic and industrial indexes follow the S&P 500 index closer. Meanwhile, in expansion and deceleration stages the retail sales index is a better way to forecast the potential performance of the Mexican economy. Finally, ovserve the final month with data for the same four indexes: October 2010. 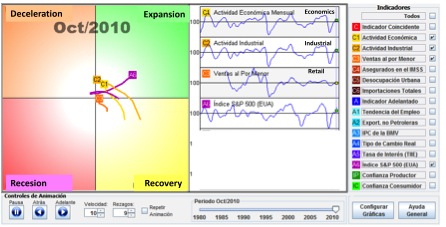 It seems we could have good news for 2011. But let´s go back to the real problem today in Mexico: the poor correlation between macro-economic performance and the micro-economic reality in Mexican families. Mexico is in fact a country with very low social mobility. If you are born poor most probably you will die poor. That has been happening for generations! Although there are several factors that are involved, I will focus just on this as one of the causes of the unsuccessful “War” against the drug dealers in Mexico.

Below you can see what the New York Times reports regarding this war. 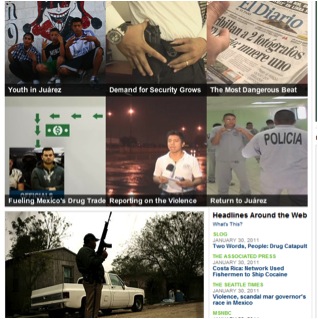 “Although Mexico has been a producer and transit route for illegal drugs for generations, the country now finds itself in a pitched battle with powerful and well-financed drug cartels. Altogether, more than 28,000 people have been killed in the nearly four years since President Felipe Calderon began his offensive against the nation’s drug organizations, with the gangs escalating fights over turf and dominance as the federal police and military try to stamp them out. Of those, over 2,000 were local, state or federal police officers, according to the Public Security Ministry. Top police commanders have been assassinated and grenades thrown, in one case into the crowd at an Independence Day celebration.”

This is one of the main reasons that we can see the high potential for Mexico to become a failed state. But how does this relate to the initial dialogue between Dr. Beck and a young entrepreneur? From my point of view if we—as Mexicans—could build at least a 100 year map of causal relationships, we also could discover to our amazement, that we in fact “DESERVE” this current reality, since all Mexicans and mostly those above their thirties are full responsible for both our actions as well our non-actions. Unfortunately, the latter is more frequents: expecting that “somebody” would arrive to fix our problems.

Finally, I derive the following conclusions.

Failed state: A dysfunctional state that also has multiple competing political factions in conflict within its borders or has no functioning governance above the local level. This does not imply that a central government facing an insurgency is automatically a failed state. If essential functions of government continue in areas controlled by the central authority, it has not “failed.” An example of a failed state is Somalia. http://www.semp.us/publications/disaster_dictionary.php?letter=F

Collapse: A drastic decrease in human population size and/or political/economic/social complexity, over a considerable area, for an extended time. (Diamond, 2005)

Roberto Bonilla is part of the Mexico team that runs the Center for Human Emergence for Mexico and Latin America. Since 2000, he has studied the Spiral Dynamics Integral framework, applying it in his business consulting practice. Shoulder to shoulder with Karina Eichner, he started a transformation project in Mexico (January 2007), led by Dr. Don Beck, called Integral Mexico.
www.humanemergencela.org
roberto.bonilla@humanemergencela.org

2 thoughts on “Notes from the Field: Mexico from an Economic Miracle to Potential Failed State”