Similarly, if we drop a stone into water, we get the ripples going out at ninety degree’s to the direction of the dropped stone. 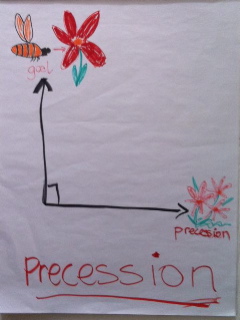 Precession and the Honey Bee

One of Bucky’s favourite stories regarding precession was the story of the honey-bee. Seemingly inadvertently, the honey-bee goes about his business of gathering honey. Precessionally, at ninety degree’s to his body and his flight path, his legs gather pollen from one flower and “accidentally “ take this pollen to the next flower, resulting in cross pollination. The outcome of this seemingly inadvertent accidental activity is that the bee contributes enormously to life on earth. Of the 100 crop species that provide 90 per cent of the world’s food, over 70 are pollinated by bees.

Precession as defined in the dictionary, is taken from Latin, to go before or precede, and applied to astronomy—the slow, conical motion of the earth’s axis of rotation caused by the gravitational attraction of the sun and moon, and, to a smaller extent, of the planets, on the equatorial bulge of the earth. Or it is taken from mechanics—the motion of the rotation axis of a rigid body, as a spinning top, when a disturbing torque is applied while the body is rotating such that the rotation axis describes a cone, with the vertical through the vertex of the body as axis of the cone, and the motion of the rotating body is perpendicular to the direction of the torque,

Lets say that you are the manager in charge of a team, and your team’s task is to achieve a 10% profit uplift every half year. You focus on the task of this profit uplift by getting the best outcomes from your team, ensuring quality customer service, implementing cross selling platforms, and other such typical business strategies.  The precessional effect in this case will be something other than the profit uplift. It may include anything on the scale from overall team development, to team burn-out.

Now, lets suppose that we flip this and instead create a goal that is far bigger than the 10% uplift. . Due consideration needs to be given to what is the best strategy by taking into account the dynamics of the overall ecosystem. For example, we could choose to focus on becoming the very best, without exception, at customer service When applied well and in the right ecosystem, this goal will have as a precessional effect a 10% (or more) profit uplift. It is a subtle but significant reframe.

In Bucky’s language, he assumed that what humanity rated as “side effects” are nature’s main effects. He therefore adopted the precessional side effects as his prime objective. He used this model as part of his self-disciplines, resolving to only ever do the greatest good for the greatest number of people, to demonstrate that if he did so, precessionally, there would be money and other resources to provision him on his life journey. Just as the honey bee did not need to earn a living, humans working at adding value to the healthy survival of humanity, doing what they were uniquely designed to do (in integrity), would not need to earn a living. Nature would precessionally provide for them. (Not in the way the corporate machine requires —excessive profits, excessive executive salaries, etc. but rather in a way that is more in balance with natural design.)

At a personal level we need to be in motion. Or as Albert Einstein said, ‘Nothing happens until something moves.” Fear and depression paralyze us. Crisis can cause either stasis or chaotic ineffective motion. For precession to be most powerfully evident, motion is essential, and considered motion even more effective.

Why is precession an important consideration in integral leadership?

In understanding the principle of precession we can no longer be irresponsible about any thought, word or action. All thoughts, words and actions create a precessional effect. We need to be vigilant in our consideration of exactly what precessional effects we are creating, and what are the consequences of these effects.

Humans have been money-seeking beings for a very long time. Like the honey-bee, we have gone after money (honey). The precessional effects of this are becoming increasingly obvious. We have massive breakdowns in our environment and our economic systems.  The gap between the very wealthy and the poor grows increasingly. Power is concentrated in very small pockets. Our politicians are ruled by money. Our businesses are focused on money, at the cost of almost everything. There has been a systemic detachment between exchanges of value and productivity.

Man has always been highly creative. However, our real creativity has often been a precessional effect of needing to emerge through emergency. When the ecosystem is flourishing the need to create new technologies is not so important. War has historically been the fulcrum around which innovation has occurred. The precessional effect of weaponary and war has been innovation in space, computer technology, medicine, etc; as well as loss of life, tribal/cultural diaspora and ecosystem breakdown. Now more systemic issues like climate change, economic collapse and the obvious need for alternate energy sources shall be the triggers for innovation. (Maybe not in the USA, unless the military budget, which is 51% of the total of ALL global budgeted defense spending, is directed towards innovation in energy, climate and economy.)

At a more local level of application, in an orange level achiever-focused business, the goal of the business is an increase in profits for the shareholders. In fact, this is not just the goal of an orange level business, it is the way our entire system is wired. The corporate model is to take commodities (without account of the all-in-cost of so doing), apply labour (the commoditization of humans) to create money. Built into the limited liability corporate model, is perpetual limited liability. In other words, to have something other than a human take responsibility for a problem. If you are an integral leader and you seek to create a business that is a model of a second tier business, then by choosing an LLC or Pty Ltd as the context of your business, the precessional effect of this choice will doom you to fail. By inviting in limited liability the precessional effect will ensure that you stay in the very system you seek to escape from.

Over the last decade businesses started by smart integral thinkers with great intentions repeatedly  are unable to escape the swamp of the current system. The business might appear to be thriving business, but it will not be a second tier model of business. Provocative statement? Certainly. Second tier includes accountability and trust. There is a constant consideration of the all-in-cost of every action. Second tier businesses also require the kind of rigor in questioning everything that we have assumed as acceptable in business practice: the company structure, our message management and delivery, how we look at accounting, what we include and measure as value. All of these elements must be brought in line with second tier thinking if we really want to build a model of second tier business. At the least we need to consider some form of integral accounting where money is only one of 6 possible values measured. An LLC with a triple bottom line focus will not cut it.

As an integral leader, ill considered precessional effects are no longer an option. You are responsible for the precessional effects, predicted or not. It is no longer acceptable for us to ignore the intrinsic costs of our daily tools. We cannot ignore the all-in cost of oil—the millions of years it took to get to be oil, the cost of getting it from the earth, the cost to the earth, the cost of removing its bi-products, the cost to environment and community. The price we pay at the gas pump is not even a small percentage of the cost of oil when we factor in all of these components. Indeed, if we did factor in all of these components then we would not be able to afford to fill our tank once, let alone every week. We have much of our escalating environmental disaster because we did not stop to consider the precessional effects of making oil our main energy supply. Interestingly, Bucky Fuller did the integral math on oil use as energy back in 1927. (see Critical Path xxxiv)

To be an integrally informed leader is to be honest about  the all-in-costs of all of our actions and decisions. Recognise that your lovely iPhone is using rare metals that are extracted from countries at a terrible price: death, rape, poverty. To know this is to consider the precessional effects. It requires the raw honesty that few people muster.

They also know that when we make the precessional effect our goal (life on earth for the honey bee), instead of the goal of honey/money, then we invite a much bigger conversation into our ecosystem. The level of responsibility goes up exponentially. Integral leaders are up for this. They have developed/ and continue to develop the capacity to take the full load of that all in responsibility.

Integral Leadership development employs precession with consciousness to support the main effects of moving toward ever more sustainability for all of life on earth. An integral leader will consider precession as part of the overall strategy, which also includes other principles, such as synergy, ephemeralization (doing more with less) and integral accounting. 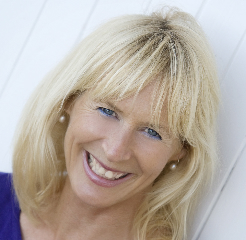 Christine McDougall has been coaching and facilitating full time for 14 years, one of the very first coaches in Australia. She currently works with complex, multi stakeholder systemic change issues with a group of brilliant and diverse masters from around the world. Christine’s passion is in supporting the emancipation of the human spirit, specifically in relationship to self, work, and models of business and organisation. At the core of everything she does is a pursuit of comprehensive integrity.