My intention in this article is to explore emerging concepts and forms of integral leadership, pursuing how they can be scaled up to bring humanity – across the planet – onto an evolutionary and sustainable course. After offering some fresh distinctions about leadership, the article calls for a shift to a radically innovative development model and points to key qualities and practices of evolutionary leadership. I then share some views on the multiplying effects of an integral approach to leadership development – in the context of a transformation of education – and conclude with some avenues to disseminate these emerging leadership forms, so as to deal constructively with what Barbara Marx Hubbard1 calls the current “birthing pains” of a new civilization.

A profusion of articles and books have been written about leadership in recent years. But many of them do not make a clear distinction between authority and leadership, between authority and influence, or between executive leadership and distributed leadership. Authority is well adapted to solving technical or convergent problems (problems that have one solution), whereas leadership is required to address what E.F. Schumacher2 called “divergent problems” and Ronald Heifetz3 characterized as “adaptive challenges”.

When making fresh distinctions about a term, it is often useful to go back to its original etymology, especially when considering that the word “leadership” only exists in English and has been “imported” in other languages. The verb “lead” comes from the Indo-European root “leith”, which means to go forth, to cross a threshold, or even to die. What threshold needs to be crossed so that something new can emerge? What do leaders need to let go of, to die to, in order to cross that threshold? What if exercising leadership meant:

Crossing a threshold is the first step in the hero’s journey, according to Joseph Campbell4. Individual heroes are still needed today but, in the best case, one of their key roles is to invite many others to become “heroes” as well – on the path to exercising shared or collective leadership. Dying to one’s sense of “separateness” from the Source or from other human beings is to allow the essence of divinity in one’s heart and to become a distinct but unifying instrument of evolution and the collective greater good. To connect and give energy to the higher self and sacred being of another is to enact the true spirit of partnership or co-leadership, as musicians do in a jazz band or chamber orchestra without a conductor. In the Global Transforming Ensemble5, we call this “awareness-based, love-infused, presence-centered, evolutionary leadership”. 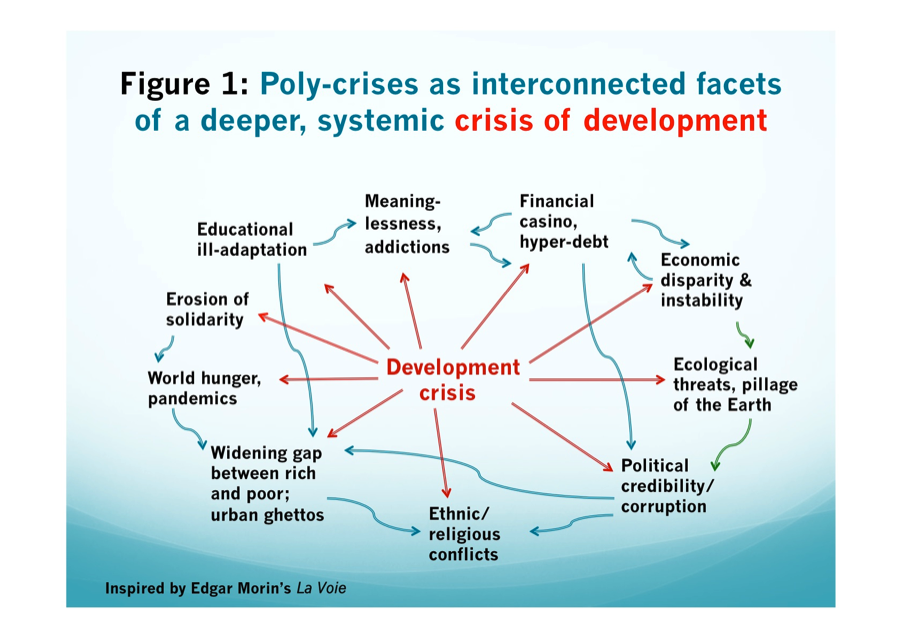 Our prevailing development paradigm is based largely on masculine/ patriarchal values, with four self-reinforcing building blocks:

This largely unquestioned development model – and the corresponding growth in the number and influence of MBAs and modern economists in the last 30 years – has led to a hypertrophy of the economy, at least in most western countries. Many people were led to believe that the economy would bring progress into their lives and it did so for a while. In Europe, we moved 300 years ago from an “economy of salvation” (where people could buy papal indulgences to redeem their sins) to “salvation by the economy” (where people could buy happiness in this world). But now the economy has invaded and damaged the geosphere (over-exploitation of non-renewable resources), the biosphere (deforestation, degradation of arable soil, air and water pollution, climate change), the political sphere (growth of influential lobbies and corruption), and the cultural sphere (loss of independence of mass media, education, the arts, and degradation of family life). 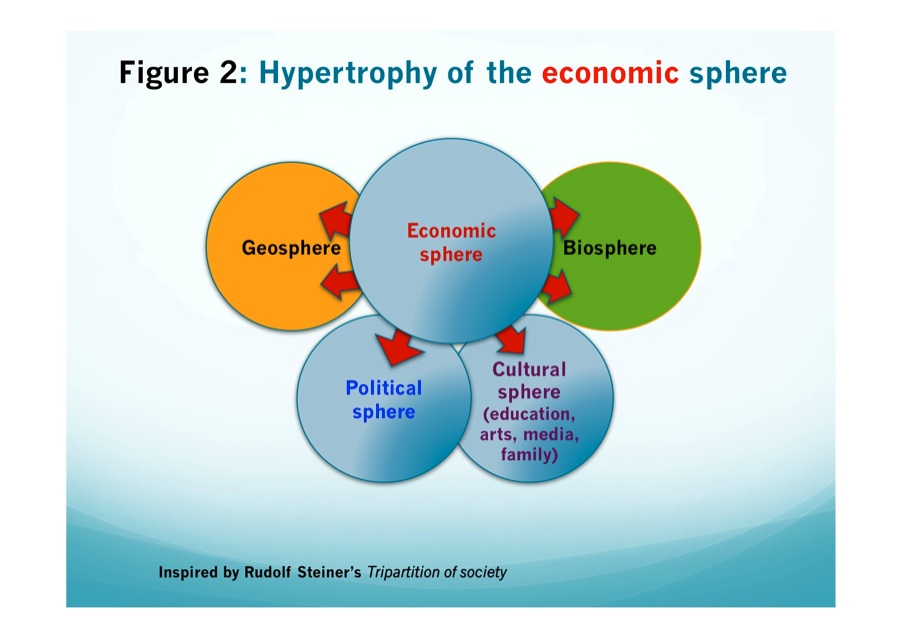 A radically new development paradigm is needed NOW – one that is not based on ever-increasing material growth, but on long-term sustainability and broader measures of individual and collective well-being. This new paradigm offers a better balance between masculine (Yang) and feminine (Yin) values, and has the following foundations:

Wide adoption of this emerging paradigm depends on the level of awareness and collaboration of leaders across various sectors of society: private, public, civil, education, and media. Through their own exemplary behavior as well as cultural and structural innovations, leaders can create conditions for many others to expand their own consciousness and find ways to experience a more encompassing sense of abundance in their life. Breakthrough forms of leadership development are critical for the diffusion of the new paradigm, within the context of a radical reform or transformation of education.

In response to the poly-crises and to the opportunity for radical rethinking of our prevailing development model, new concepts and forms of leadership are emerging in a number of organizations and communities around the world.

In the context of shifting from a domination to a partnership paradigm, new leadership practices are adopted by a growing number of leaders in areas such as mutual adjustment, shared sense-making, collective learning and intelligence.

2. Shared or collective leadership challenges the traditional distinction between leaders and followers who agree on a few shared goals. In these emerging forms, co-leadership produces three outcomes as means to attain longer-term goals10:

To produce these outcomes, leaders need to examine their beliefs about both individual and collective leadership and engage in practices that will create a new leadership culture.

3. The action research undertaken jointly by the Global Transforming Ensemble and the Institute for Strategic Clarity11 shows that members of vibrant organizations or communities – which reach a high level of well-being, sense of abundance, or “harmonic vibrancy” – experience a high quality of relationship along five dimensions simultaneously:

When the dynamics of harmonic vibrancy are at work, there are several positive reinforcing loops (across the four quadrants) that connect ability to self-sustain, ability to self-determine, cultural identity, effectiveness of social structures and processes, strength of the social fabric, and available economic opportunities. 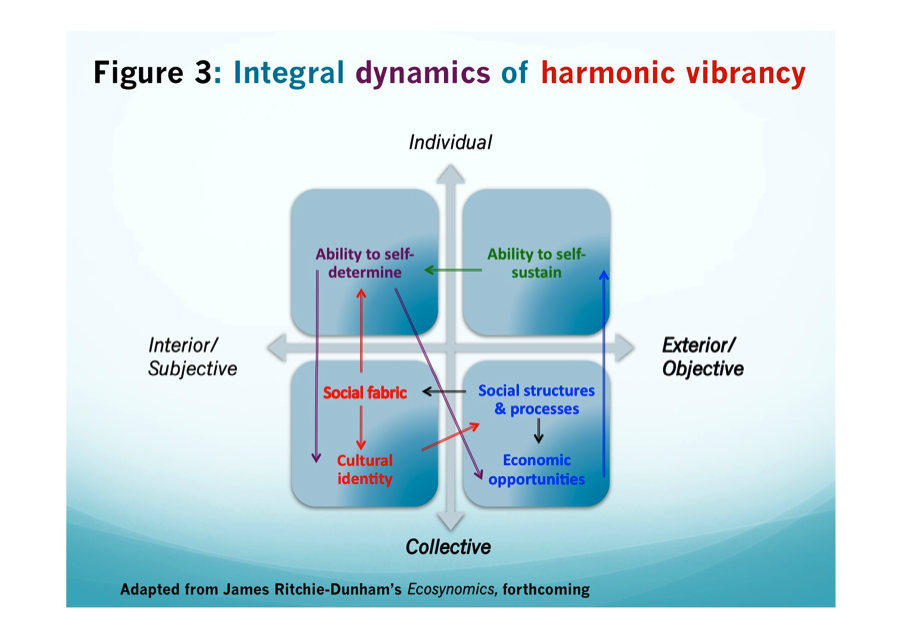 Initial survey results of 600 communities – followed in some cases by in-depth interviews with several members – show that the level of harmonic vibrancy in the collective is influenced by the quality of leadership that can be characterized by several interior conditions:

The Global Transforming Ensemble’s 3H model of presence-centered, evolutionary leadership clusters a number of these qualities around three subtle energy centers: Head, Heart, and Hara – in relationship to self, others, and the whole. Each center corresponds to an aspect of the emerging forms of evolutionary leadership we observe in the field: awareness-based, love-infused, and presence-centered. 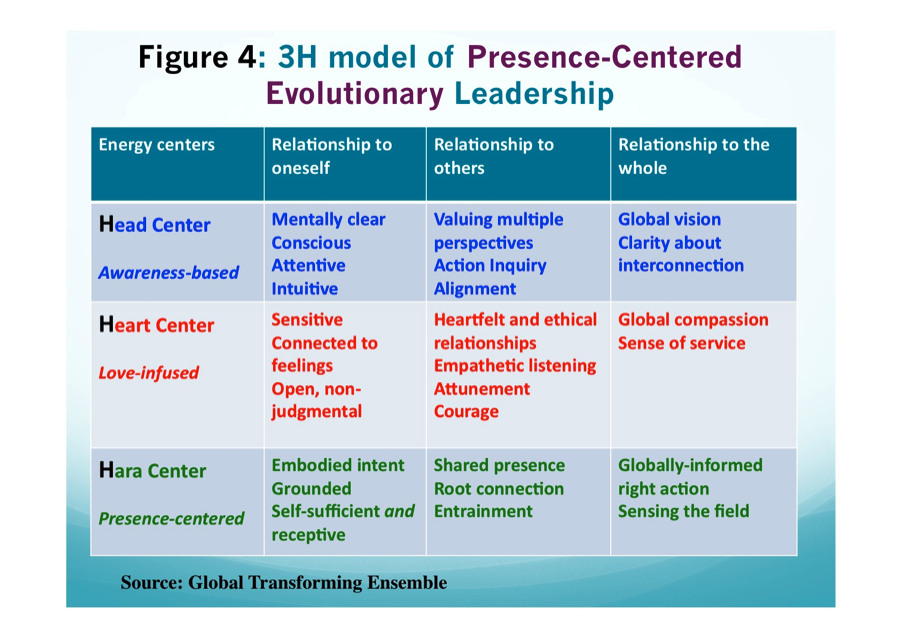 4. Leadership practices at three levels (personal, interpersonal, and systemic) can reinforce each other. They support personal and organizational transformation, and give access to internal guidance and collective wisdom:

a. Personal practices include various forms of individual action inquiry that enable a person to lead an
intentional life and to develop as a learning, exemplary leader: 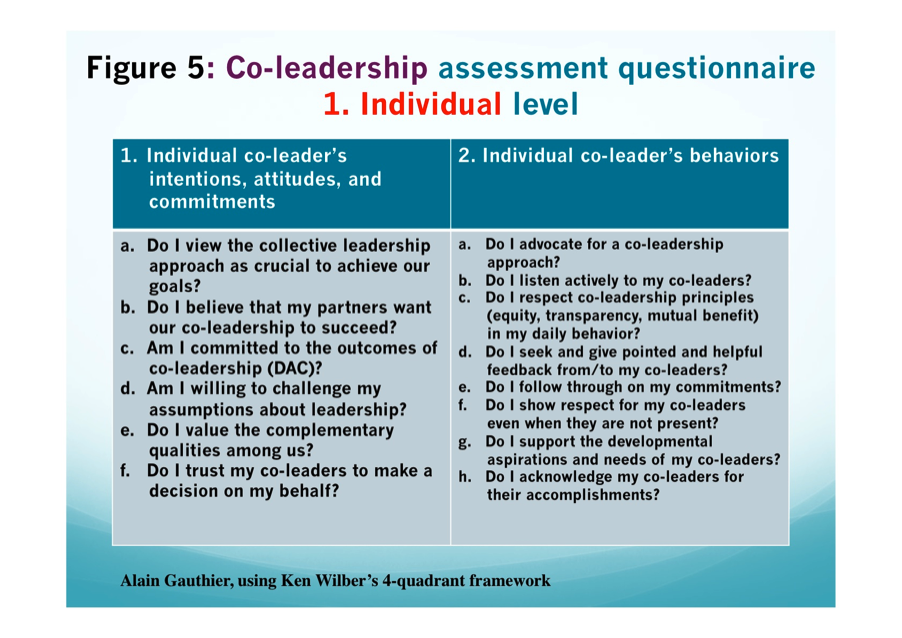 b. Interpersonal practices include multiple forms of collaborative inquiry: 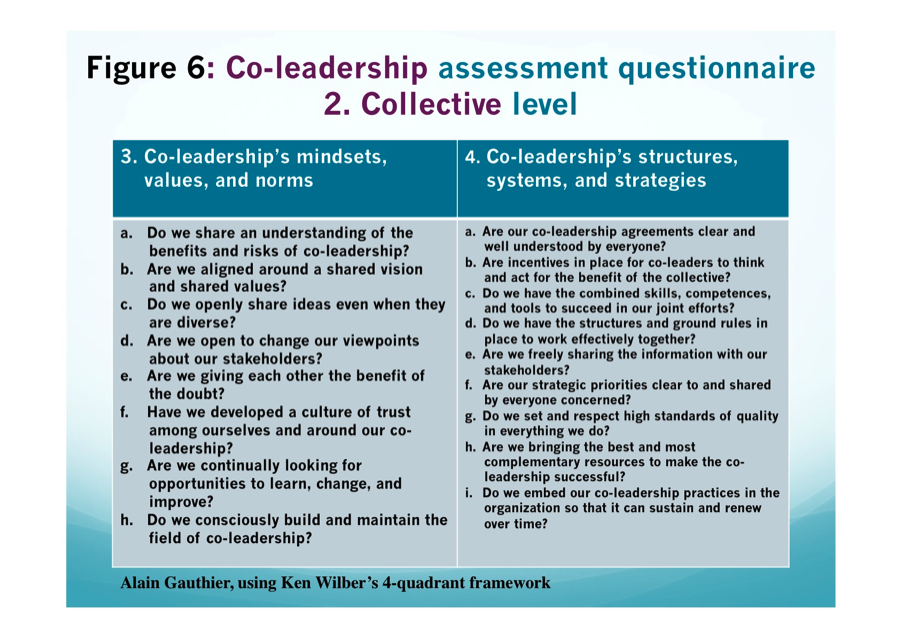 On a societal level, a transformation of education in all its aspects – education of parents, formal education K-12, higher and on-going education, management and leadership development, media programming – will offer the largest multiplying effects: 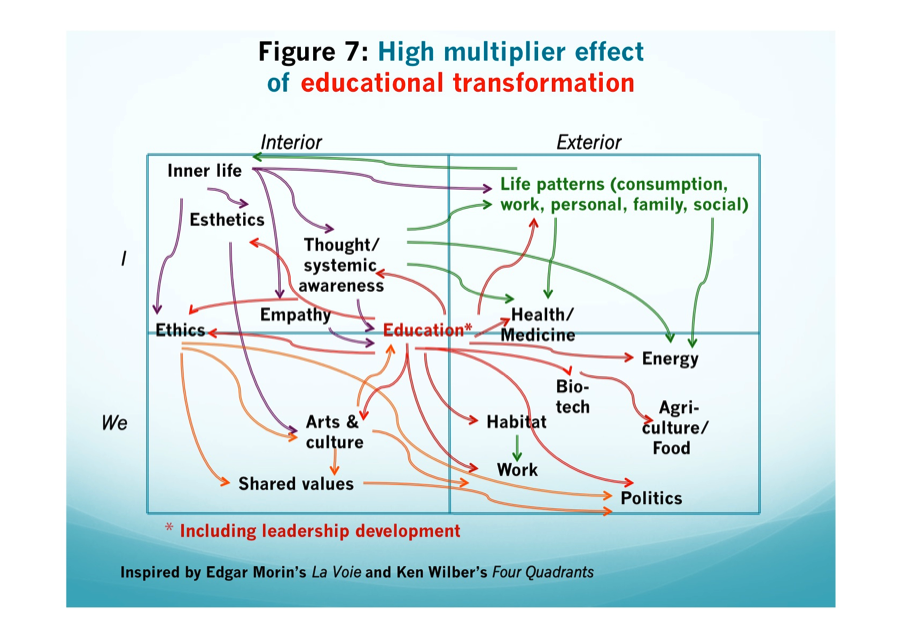 However, that transformation requires a radical rethinking of education’s outdated premises – as well as the collaboration of many individual leaders and institutions – while building on the many alternative experiments that are already in existence and growing.

With a new view of human nature, a transformed education in its various forms will be both nurturing and challenging – through shared pedagogical experience and facilitative teaching. It will develop empathy and emotional maturity, appreciative inquiry and participative observation, collaborative learning, environmental and social literacy. It will enable every person to become more aware of his/her own true gifts and more willing to offer them in service to the community.

From a developmental perspective, this education will cultivate the ability to be present to what is, to adopt a systemic perspective, to search for both/and responses and solutions, to be at ease with ambiguity and paradoxes, and to feel responsible for authoring one’s life while caring for the whole. Liberating the capacity for self-education and developing a thirst for life-long learning will cultivate the conditions for leading an intentional life and embodying a new development paradigm as a leader.

Within that broader context, new designs for leadership developmenttake several dimensions into account:

Scaling up Evolutionary Leadership to Serve a New Development Paradigm

Several avenues are already being pursued and could be widened and multiplied to disseminate new forms of leadership on a large scale in the next few years:

We are witnessing the end of a world as we have constructed it. Consider that three great waves are ending: 1) A 30-year wave of ultra-capitalism and hyper-consumption, which has been characterized by excesses, economic/social/ ecological imbalances, and the resulting ill-being for many. 2) A 300-year wave of modernity that has brought multiple freedoms and human/social rights, but also an objectification of nature and humans, as well as new forms of inhumanity. 3) A 3000-year “mental age” of humanity, characterized by a lack of balance between mental intelligence and body, heart, and soul intelligence20.

Fortunately, many signs of the swelling of a new wave are already visible – although not yet acknowledged by the mainstream media. And new forms of leadership are emerging that create conditions for people to “grow in humanity”. These developments combine the best of modernity and the best of indigenous societies into a new wisdom – in relationship to nature, community, and meaning. Through the wider adoption of individual and collective integral practices – as well as a transformed education – leadership everywhere can exemplify the deep interconnectedness between personal and societal transformation. It will encourage a qualitative development for all beings during this quantum jump in evolution.

1 Barbara Marx Hubbard, The Shift from Ego to Essence, 2001.

3 Ronald A. Heifetz et al, The Practice of Adaptive Leadership – Tools and Tactics for Changing Your Organization and the World, 2009.

7 Jeremy Rifkin, The Empathetic Civilization: The Race to Global Consciousness in a World in Crisis, 2009

8 Riane Eisler, The Power of Partnership: Seven Relationships that will Change Your Life, 2003.

12 Robert Kegan and Lisa Lahey, Immunity to Change: How to Overcome it and Unlock the Potential in Yourself and Your Organization, 2009.

14 Jon Katzenback and Douglas Smith, The Wisdom of Teams: Creating the High-Performance Organization, 2003.

17 Susanne Cook-Greuter, Post-Autonomous Ego Development: A study of its Nature and Measurement, 2010

18 William Torbert and Associates, Action Inquiry: The Secret of Timely and Transforming Leadership, 2004.

Alain Gauthier is an international consultant, facilitator, coach, and educator who focuses his work on developing co-leadership and partnering capabilities in and across the public, private and civil society sectors. He is passionate about integrating the inner and outer dimensions of human experience, both at the individual and collective levels.

Alain is a senior associate of the World Café Community Foundation and has facilitated meetings on partnership capacity building in several African countries, as well as in Europe, Latin America and the United States.

A graduate from H.E.C. (Paris), Stanford University M.B.A., and former senior consultant at McKinsey & Company, Alain is currently Executive Director of Core Leadership Development in Oakland, California. Over the last 45 years, he has served a wide range of clients, from large American, European, and Japanese corporations to three UN Agencies, global foundations, healthcare and educational systems, as well as other organizations in the for-profit and non-profit sectors.

Alain has adapted and prefaced in French three of Peter Senge’s “Fifth Discipline” books, and is a co-author of “Leadership is Global” and “Action Inquiry: The Secret of Timely and Transforming Leadership”, as well as of two books on coaching and leadership development in French. He is a co-founder and active member of the Society for Organizational Learning (SoL) in the United States and France, a member of the Global Leadership Network, and a visiting professor for the Coaching/Personal Development Master’s Program at the Université Panthéon-Assas Paris II.