SENSEable City Lab (SCL) is a research initiative at the Massachusetts Institute of Technology (MIT) aimed at investigating and anticipating the ways digital technologies are changing the way people live and their implications at the urban scale (1). The SCL is nested within the City Design and Development group at the Department of Urban Studies and Planning and has had an ongoing collaboration with the MIT Media Lab. Over the past 7 years roughly 350 collaborators, representing more than 60 different scientific disciplines (from architecture, urban studies and planning, civil and mechanical engineering to theology, game programming, Russian studies, medieval studies, sport, music, space science, Asian arts, economy of culture and many others) have collaborated on SCL’s projects. With its transdisciplinary, context-driven, problem-focused approach, the lab truly embodies what has been defined as ‘Mode 2’ knowledge production practice (Gibbons et al. 1994). A practice that involves multi-disciplinary teams brought together for short periods of time to work on specific, complex problems in the real world, thus exploring new ways of developing the competency of transdisciplinary collaboration.

This article is an account of an ethnographic study conducted at SENSEable City Lab over a period of four months from February to May 2011. The study was particularly focused on SENSEable City Lab’s organizational culture of transciplinarity.

This short paper is the result of a dialogic interpretation of the results of the full study, a conversational process between Luca Simeone – the cultural anthropologist who led the ethnographic analysis – and Carlo Ratti – SENSEable City Lab’s founder and director.

Overview of the Research Project

SENSEable City Lab acts as an initiative that coagulates multiple creative streams and productive energies coming from in-house transdisciplinary researchers and external collaborations with other institutions, laboratories, companies. Along these reactive and agile joints, SENSEable City Lab generates disruptive work that spans from architectural interventions, such as The Cloud, an architectural system for the city of London, to innovative product design, such as The Copenhagen Wheel, a responsive system that transforms ordinary bicycles into hybrid sensors/actuators that provide feedback on pollution, traffic congestion and road conditions in real-time, or to future sensing technologies, such as TrashTrack, an initiative that used hundreds of small location-aware tags to track different types of trash to reveal the final destination of our everyday objects (and the waste management practices behind the removal process).

As students, scholars and practitioners are a part of these projects they weave their own personalized trajectories, patrolling the frontiers of different disciplines, pioneering new methods and practices and building learning structures in a sort of mathetics in action (2).

SENSEable City Lab therefore represents a unique observation landscape and we decided to carry out an ethnographic study in order to trace the key components of SENSEable City Lab’s organizational culture that favor its transdisciplinary.

Scientific literature on trasdisciplinarity has followed different approaches: while some authors have insisted on the idea of transdisciplinarity as a continuous and enriching transit among different disciplines in order to grasp the multiple dislocations of contemporary life (Gibbons, Limoges, et al. 1994; Nowotny, Scott, and Gibbons 2001), others have adopted a more integrated perspective (Nicolescu 2002; Max-Neef 2005) grounded on new science paradigms (Wheatley 2006). Max-Neef synthesizes this approach by stating: “Transdisciplinarity, more than a new discipline or super-discipline is, actually, a different manner of seeing the world, more systemic and more holistic” (Max-Neef 2005, 15).

For the purpose of this study, we decided to focus on the operational dimension of transdisciplinarity in the design field: an intersectional meander located at the crossroads of theory and practice. Several studies – such as the recent collection edited by Doucet and Janssens (2011) – have reported on the important relation between transdisciplinarity and design: knowledge production in design, architecture and urbanism is strictly tied to the integration of discipline and profession  that follows a designerly mode of inquiry. Transdisciplinarity seems to be a productive approach for designers who want to tackle perplexing and complex real-world problems. 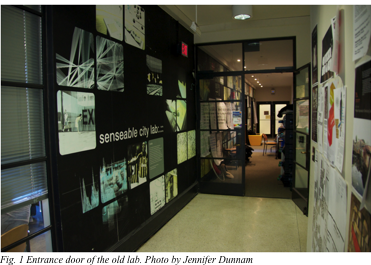 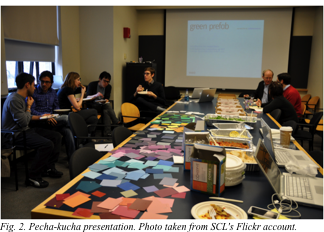 The cultural organization of space, the organizational patterns and the cultural artifacts analyzed in the previous paragraph form a sort of underlying grammar that seems to influence transdisciplinarity.

True transdisciplinarity should cross the boundaries of academia and industry and operate in complex environments, constantly referring to the stakeholders’ dynamically and historically situated imaginings that shape the sphere of social legitimacy. In this sense, transdisciplinarity can be considered a crucial building block to restructure those fields of higher education still organized in traditional silos and to extend their own spectrum of activity towards more significant interventions in real-life problems.

This article was a short report of the first phase of a multi-year research project. In the next phases other design research labs in the USA, Europe and Asia will be investigated in order to evaluate the organizational culture behind their transdisciplinarity with a particular focus on their different contextual conditions. Some key components of organizational culture may be effective in one laboratory while in another may not work at all, as the laboratories live and perform within different economic, social, cutural, contextual conditions. What really works for SENSEable City Lab in terms of organizational culture may not be suitable for other laboratories.

The study is still at an early stage and any recommendation from the community of authors and readers of Integral Leadership Review is more than welcome.

The entire SENSEable City Lab team significantly contributed to the study, giving insightful and productive comments. The full list of credits and additional information on the final results can be found at the following url: http://senseable.mit.edu/sos/.

(1) Extract from the description on Wikipedia (http://en.wikipedia.org/wiki/MIT_Senseable_City_Lab), accessed March 15, 2011.

(2) Seymour Papert defines mathetics as following: “Why is there no word in English for the art of learning? Webster says that the word pedagogy means the art of teaching. What is missing is the parallel word for learning”, and he continues saying “I would use the noun mathetics for a course on the art of learning” (Papert 1994, 82).

(3) Pecha-kucha is a presentation format where 20 images are shown each for 20 seconds. The images forward automatically and presenters talk along to the images (http://www.pecha-kucha.org/).

Nowotny, Helga, Peter Scott, and Michael Gibbons. 2001. Re-thinking science: knowledge and the public in an age of uncertainty. Oxford-Malden: Wiley-Blackwell.

Luca Simeone is a design anthropologist and entrepreneur. He teaches at the University of Rome, Italy and is a PhD candidate at MEDEA Malmö University in Sweden.
In 2011 he was a research affiliate with the Senseable City Lab at Massachusetts Institute of Technology in Cambridge MA.

Carlo Ratti teaches at the Massachusetts Institute of Technology’s department of urban studies and planning, where he directs the Senseable City Laboratory. He also practices architecture and urban design in Turin, Italy.