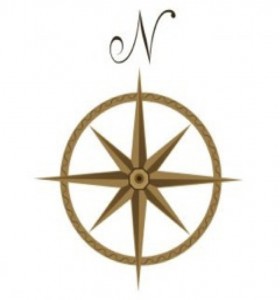 Leading at the Intersection

Our future, in a global sense of the term, seems to consistently emerge from Intersections of Potential. In addition, it seems quite clear that new knowledge is very often born to the world at the Intersections of Disciplines. Taken together these two intersections would seem to have an evolving quality to their nature producing ascending or lifting vectors of potential while at the same time adding velocity to change dynamics. The former, Intersections of Potential, is more about revealing opportunities and possibilities and the latter, Intersections of Disciplines, more about creativity and discovery. Taking these attributes collectively it is conceivable, in an alchemical fashion, to begin to distill deeper meanings and therefore a deeper purpose for integral leadership at these intersections.

I believe second tier people can share the same reality space much more easily and deeply because they have less “overlay” and fewer “read-ins” on top of what is. When second tier people meet, there is more of a convergence (or perhaps “meta-convergence”) of points of view (rather than being spread all over the map with points of view that tend to cancel out each other and create stalemates). Second tier people have (and are) a multidimensional and more sophisticated set of yardsticks and resonators by which they allow, measure, co-resonate with, co-create and co-evolve what is. These yardsticks span interior-exterior, one-many. (Wayne Carr, June 2011)

Returning to Volckmann’s “Integral Leadership and Diversity—Definitions, Distinctions and Implications” (Figure 1) it is possible to recognize the second tier features at work. Second tier leadership achieves higher vantage points and creates deeper processes (Wayne Carr). In this example we can see how the various constructs and themes surrounding integral theory, leadership, and diversity can be connected at a “meta-level”.  These “higher perspectives can transcend and include intellectual, rational, emotional, intuitive, and sensory perspectives and are based on and grounded in primary perceptions and processes.” (Wayne Carr, June 2011) 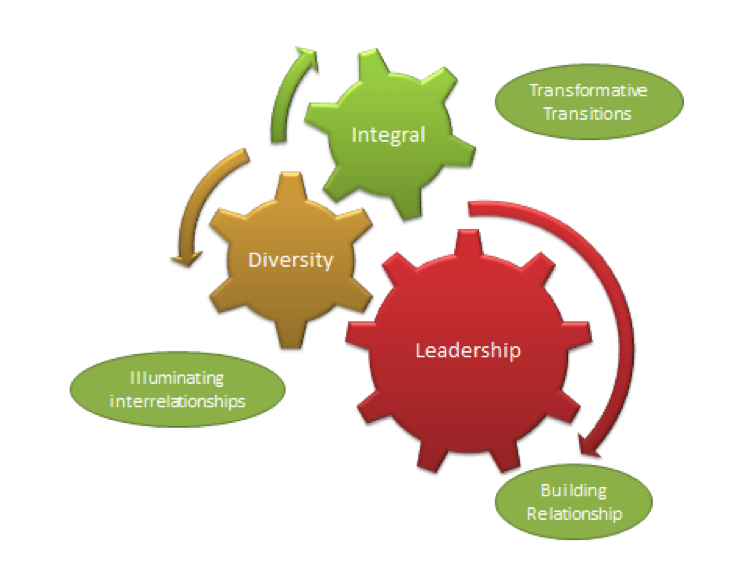 The Intersections of Potential, in order for them to actualize, bring with them a need for autonomy and relationship – an odd pairing I would grant, and yet these are precisely the energies at play at the intersections of potential. An ecotone is a natural example of the power of the intersection and the pairing of odd but effective systemic opposites. An ecotone is defined as a transition area between two ecosystems. The transition zone may appear as a gradual blending of two ecosystems across a broad area, or it may manifest itself as a sharp boundary line. The word ecotone was coined from a combination of eco(logy) plus -tone, from the Greek tonos or tension—in other words, a place where ecologies are in tension. At these locales species diversity, both flora and fauna, is at its greatest. Often there is a rich blending or mixing of the genetic pools as diverse species attempt to bridge the environmental differences while taking advantage of the opportunities for growth. Both competition and cooperation seem heightened and ecological equilibrium teeters on subtle balance points.

At the Intersection of Disciplines, on the other hand, we often find opportunities for creativity and discovery and, oddly enough, the very same dynamics of competition and cooperation found within all ecotones. The tension here revolves around the gradient of re-collection. Re-collection is what leads to what I have called integral or synergistic knowledge. When done alone, through study and experience, it can yield a powerful forward momentum in personal understanding and development. When done in relationship (person-to-person, within community, within society) it may yield unexpected gains in knowledge for a discipline or to interdisciplinary discoveries.

This is how re-collection works. Keep in mind that connected knowledge is the most usable form of knowledge. Without connecting new knowledge to existing knowing learning is seldom sustained. John holds the reference points (truths\knowledge) A, B, and C. He begins a study of D. As he studies he begins to connect that which he currently knows (A,B,C) with D and discovers that it enriches A, B, C to the point that he becomes slightly unsettled (well actually he could become very unsettled) concerning the strength and durability of his current knowledge. It’s not that his former position was bad; it was that it was incomplete (this is the reoccurring pitfall of epistemology—it is always incomplete). John moves into a reflective and reflexive progression where this new concept or learning must be infused into his current schemas. This could cause the elimination of a once held reference point, a transformation of that reference point, and/or the formation of a new reference point. That reflective/reflexive progression is a re-collection of our knowledge that incorporates our new learning and/or experience into our growing epistemology. Furthermore, (and this is more evident in relationships of the person-to-person, community, or societal significance) we discover that this re-collection is seldom an additive function. In our example, we may well discover that A can no longer be upheld and was re-collected to form ‘Aa’ and that our understanding of B and C deepened the whole of our understanding that we not only grasped D but now for the first time E and F have moved into our awareness without study. Re-collection yields forward momentum.

This is easier to see within relationship. Let’s take three people working together to create a new product. John still holds A, B, and C; Diane holds D, E, and F; and, Sam holds G, H, and I. Working together they share their knowledge and experience. If the heavy blade of epistemology is kept at bay (the one that fixes the one truth and would evoke the building of defenses for existing knowledge) the relationship can begin to move in a synergistic fashion. Sharing their reference points, the relationship expands to the point that learning is pronounced and purposeful. Each in turn grows and the full complement of knowledge grows until all now hold the reference points of the other. Furthermore, and this is the point, because we now hold all this collective knowledge we can create new solutions and new knowledge that was hitherto impossible individually. This is the power of transdisciplinarity and of leading at the intersection. The irony held by such a platform for leading as well as teaching and learning, perhaps the greatest of all ironies, is that we risk all we know, our total knowledge, when we pursue greater understandings at the Intersections of Potential and Intersections of Disciplines. Plainly, what I now hold as wisdom can be washed away in a storm of enlightenment.

The Big Problem of Ecotones

If there were such a thing as a Perennial Intersection of Potential and Discipline I might suggest that the intersection of creativity, spirituality and empowerment be considered. My biases spring from my experiences with what could be called catalytic teaching (McCaslin and Scott, 2001). At the core of catalytic teaching is the belief that creativity and the act of creating are sacred to the human condition; that spirituality is a birthright that holds the soulfulness of possibility shaped by our innate need to create and to be creative; and, that empowerment is a growing inward force of creativity dedicated to the full actualization and expression of human potential. I have found current and historical models of teaching and leading, while well researched and well-intended, too often left the teacher and leader with a haunted wanting and treated the student or associate as a product to be consumed rather than a potential to be actualized. Creativity is too often not celebrated in such efforts – rather out of fear, it is discouraged. Human potential suffers as creativity is dismissed or is threatened by the ruthless metrics of failure. With these attitudes and measuring sticks we effectively crush the creative way of being for teacher and student as well as leader and associate, and in the process arrest the growth of human potential within the individual and the community of potential.

Leading at the intersection would require an understanding that creativity, spirituality, and empowerment are an inseparable triad – that while the synergy attainable by their bonding may indeed be omnipotent, in the end it is not pre-potent. It is tender in the beginning. The bonds of this triad are easily shattered. As a consequence, once creativity is stifled, our spirituality becomes compromised and, accordingly, empowerment is negated. The relationship of potential fails. Creativity, spirituality, and empowerment form an inseparable triad that is foundational to catalytic teaching and to leading at the intersection.They collectively form and represent the enlivening force common to our innate potential. This enlivening force defines Intersections of Potential and Intersections of Disciplines.

“The significant problems we face cannot be solved at the same level of thinking we were at when we created them.” This often quoted line by Albert Einstein holds significant meaning for the present case. To build a new way of greeting and understanding that emergent future we must not only include that which we can perceive, our present and past ways of knowing, but also that which we can intuit. We must come to hold a faith in the potentials of the organization to create the good solutions for the problems and challenges we face. I think what Einstein was giving us was the grand secret of actualizing the full realm of human potentials to be found at Intersections of Potential and Intersections of Disciplines. What he was saying was; it is not about the knowing, it is about leading and learning at the intersection.

[RV1]Does this assume the student does not lead?

[RV2]Can we talk about this? I need some feedback.