Here is a real life tale about being an entrepreneur, a business partner, a naïve person, and the victim of embezzlement. It’s the tale of how a couple of old friends have been moving through one “Gumption Trap” after another.

In 2008, my basketball shooting buddy, Al Heystek, told me that he had significantly improved his free throw shooting by using a little gizmo that he had invented while training in the driveway. Al had been shooting hoops for decades, and he wondered if his little invention might have some marketability. So, off we went to a church gymnasium where I set up my video camera. In 60 minutes, Al made 484 free throws out of 500 shots. That’s 96.8%.

Al and I began by hiring a local company that claimed to have the ability to bring an invention to market. We went to their offices, talked with the owner and two staff people, and began working with a product engineer. Naturally, we also paid out some money to get the ball rolling. We worked with our attorney to form a corporation, got banking set up, and hired a patent attorney. We borrowed $20,000 through a Small Business Loan to pay for it all.

About a year later, when the invention company we hired was pushing along a lousy prototype too vigorously, I began to ask for some specific documentation. Long story short, we were out $17,000, and we had little remaining to show for effort and time. At the end of our relationship with that company, we were among 30 local inventors that were taken in by the illusion of competence.

My previous life experiences with “gumption traps” helped to pull us through. The term was coined by Pirsig (Chapter 26) with reference to that moment in time when one is confronted by a problem that is disheartening, where discouragement sucks away enthusiasm and the mind has lost its creativity. In a gumption trap, we have lost our momentum. “Gumption” refers to initiative, assertiveness, resourcefulness, courage, shrewdness, common sense, and guts. Consider these uses of the word: “With her gumption, she’ll find a way to get it done.” Or, “It takes gumption to get into therapy and work on your own stuff.”

The “trap” piece of this refers to the negative-feedback loop that results in self-defeating behavior. With the loss of gumption, one might also experience anxiety, even panic. There may also be a depressing loss of enthusiasm and energy for the project at hand. Without the requisite energy, the probability of making further effective progress diminishes, and that sucks away even more gumption. Discouragement diminishes effort, which only increases the likelihood of failure, and the negative-feedback loop results in even more self-defeating behavior.

Fortunately, for our little entrepreneurial start-up sporting goods business, when we hit the gumption trap we knew what was happening to us.

Yes, we had been bamboozled. That we weren’t alone helped only a little. We were naïve, and that was inescapable. We had lost a lot of time, tried some prototypes that all failed, and we were in debt. But, we still believed in the efficacy of our Free Throw Trainer™, and so we pushed on.

A “gumption trap” typically happens when we hit “The Dip,” which has been a very helpful concept in my coaching and therapy work. Godin published a book by the same title, in which he said that there are dips, cul-de-sacs, and cliffs. You push through dips, and quit cul-de-sacs and cliffs. “The Dip is the long slog between starting and mastery.” (17) “The Cul-de-Sac (French for “dead end”) is so simple it doesn’t even need a chart. It’s a situation where you work and you work and you work and nothing much changes. It doesn’t get a lot better, it doesn’t get a lot worse. It just is.” (19) The Cliff is cigarette smoking; in which one is spoon-fed the pleasure until it turns cancerous. If a thing is really worth doing, it probably had a dip in it somewhere. Stick through the Dip, and quit the Cliff and Cul-de-Sac. You get to success more quickly if you do. I’ve given many a copy of this little book to individuals and teams that were stuck in the dip and struggling to find the gumption to push through.

In a previous issue of Integral Leadership Review, you will find a book review I wrote about Kegan and Lahey’s book, Immunity to Change. Let me oversimplify. Efforts at change fail because commitments to deeply held and often unconscious assumptions aren’t changed. Dips and gumption traps result, and that is where we often make a mistake; we get stuck or we quit when we should stick with it.

One can use AQAL to discern if you are in a dip, cul-de-sac, or cliff, if you are struggling with an immunity to change, if you are short on gumption, or into the trap. How is this dip or gumption trap associated with a quadrant, level, line, state, or type? What gumption will it take to push through? Or should we call it a day and quit the cul-de-sac or cliff before we lose even more?

Godin’s message to leaders was that those who achieve excellence have pushed through the dip. Pirsig’s message to leaders is that those who prevail are the ones who muster up the gumption to push through. I’ve selected some sections from ZAAMM, Chapter 26, to give you a general orientation to the indexing, diagnosing, and remedies for gumption traps.

I like the word “gumption” because it’s so homely and so forlorn and so out of style it looks as if it needs a friend and isn’t likely to reject anyone who comes along. It’s an old Scottish word, once used a lot by pioneers, but which, like “kin,” seems to have all but dropped out of use. I like it also because it describes exactly what happens to someone who connects with Quality. He gets filled with gumption.

The Greeks called it enthousiasmos, the root of “enthusiasm,” which means literally “filled with theos,” or God, or Quality. See how that fits?

A person filled with gumption doesn’t sit around dissipating and stewing about things. He’s at the front of the train of his own awareness, watching to see what’s up the track and meeting it when it comes. That’s gumption.

What I have in mind now is a catalogue of “Gumption Traps I have Known.” I want to start a whole new academic field, gumptionology, in which these traps are sorted, classified, structured into hierarchies and inter-related for the edification of future generations and the benefit of all mankind.

Gumptionology 101 – An examination of affective, cognitive and psychomotor blocks in the perception of Quality relationships – 3 cr. VII, MWF. I’d like to see that in a college catalogue somewhere.

In nondualistic maintenance, gumption isn’t a fixed commodity. It’s variable, a reservoir of good spirits that can be added to or subtracted from. Since it’s a result of the perception of Quality, a gumption trap, consequently can be defined as anything that causes one to lose sight of Quality and thus lose one’s enthusiasm for what one is doing. As one might guess from a definition as broad as this, the field is enormous and only a beginning sketch can be attempted here.

Pirsig then goes on to describe these two types of gumption traps with recommendations for avoiding them, and managing them once you are trapped. 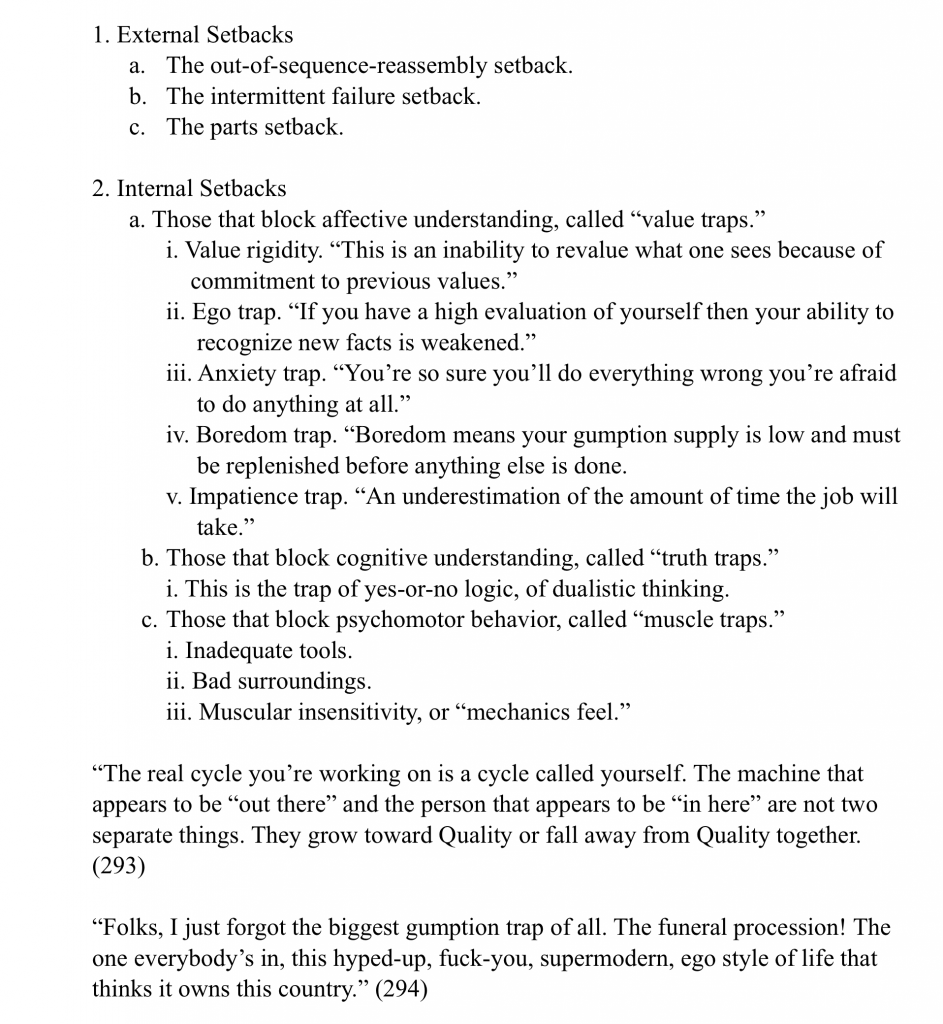 My wife and I spent yesterday afternoon with a small group of people, sitting and listening to Andrew Cohen talk about evolutionary enlightenment. As I sat there experiencing and thinking, I remembered a quote attributed to Albert Einstein, “Nothing happens until something moves.” When in a gumption trap, it is hard to move; without gumption it is hard to evolve.

It helps me, and it helps my clients, when we all remember that all of creation is always moving. It is all evolving with us, or without us. We just need to choose to take the next step. Quitting might be the best next step. Sometimes it is right to get out of the Cul-de-Sac or off the Cliff. Then again, maybe the best next step is to stick with it and push through the Dip.

Our gizmo has been manufactured, the patent is still pending, and we are paying down the debt. Our website is up and we are into the world of ecommerce. SEO (search engine optimization) is a real challenge. We are quitting some strategies and tactics, and we are pushing through one dip after another.

And so is the Kosmos.

Atwood, A. “Book Reviews: Immunity to Change Review: How We Get Stuck, and How We Get Unstuck: A Review and Muse.” (August, 2009). Integral Leadership Review. http://integralleadershipreview.com/4627-book-reviews-immunity-to-change

Andrew D. Atwood, Doctor of Ministry, practices in West Michigan with an office in Grand Rapids, “Helping people at home and at work, to get along and get ahead.” He is an ordained minister in the Reformed Church in America, with three graduate degrees. Starting in 1974, Andy was the co-founder, and Executive Coordinator, of the nonprofit Fountain Hill Center for Counseling and Consultation in Grand Rapids. After 33 years there, he implemented a succession process on himself. Today, he shares office space with his wife, Jan, who is a Master Reiki Practitioner and Intuitive Healer. Andy is a Licensed Marriage and Family Therapist, who served for nine years on the State Licensing Board for Marriage and Family Therapy. He has been a pioneer in making the transition from the professional discipline of Marriage and Family Therapy, to the work of consulting with Family Owned Businesses, Professional Partnerships, and Nonprofits. Always, he is actively engaged in leadership coaching. Andy’s life centers around his family, his clinical and consulting practice, constant learning, and the Shack in the Woods that he and his wife have built so that they have a place to go on the weekends where their souls can catch up to their bodies. Andy and his partner Al, have a website, www.FREETHROWTRAINER.com where you can find their gizmo. You can email Andy at andy@andyatwood.com.