This cartoon was given to Integral Leadership Review by the cartoonist for this special issue on Italy. We are grateful for his generosity. 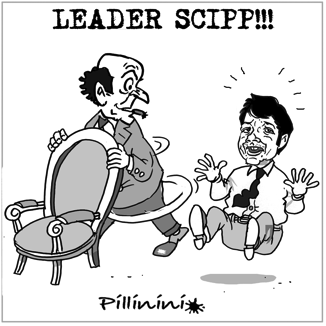 Nico Pillinini is one of the most famous Italian satirical cartoonists. He has  a diploma at the Academy of Fine Arts, Bari, working meanwhile for a restoration atelier.  He has displayed his paintings in many exhibitions in several art galleries and getting awards and prizes. He moved into the advertising business and founded an advertising company. Nico likes being  freelance and he moved again, this time into journalism working for a local magazine “Radiotvtaranto”. At the same time he started working for TV. From 1979 to 1983 he woreds for a regional newspaper “Quotidiano di Taranto, Lecce e Brindisi”. From 1980 Pillinini has published cartoons for the “Satyricon” series included in the main Italian newspaper “La Repubblica”. He worked together with some of the most famous Italian satirical cartoonist such as Vauro, Altan, Ellekappa, Disegni, and Vincino. Since 1983 he is subeditor at the newspaper “La Gazzetta del Mezzogiorno”. He maintains his own blog: www.nicopillinini,blogspot.com.  He has designed book covers and has created medals commemorating Paisiello’s famous Opera “The Barber of Seville, or The Useless Precaution”. In 2009 he was awarded with a “Forte dei Marmi” prize for satirical cartoons.