This issue has an unusual political presence, given the interviews with Terry Patten and Diane Krauthamer, Don Beck and Alfonso Monruori’s columns. Now this Leadership Emerging piece on Michelle Obama speaking to business leaders from Walmart to UPS, Motorola to Viacom, business that represent 16 million employees and $7.3 trillion worth of US revenue every year, almost half of the total US economy.

Michele Obama and Joe Biden have been leading an effort to employ veterans released to civilian live in growing tens of thousands with the closing down of US involvement in Middle Eastern wars and cut backs in military spending that I am already experiencing first hand. 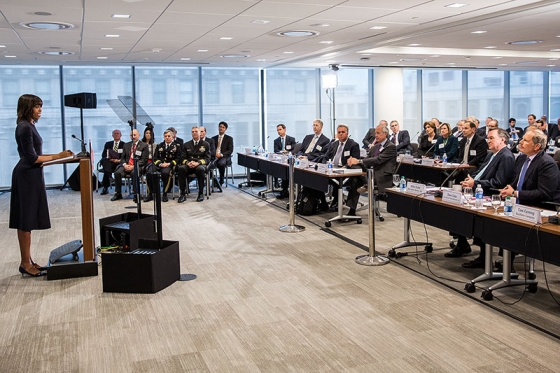 As I listened to this presentation I heard the First Lady speak to purple nationalism, appeal to red power, promote attention to blue values, orange accomplishment and green humanism and compassion. This was an appeal

I call your attention to this presentation as an example of attending to problems and challenges that face this society with an approach that is intended to bring segments of the society together, regardless of partisan positions. It is likely that sitting in that room of business executives were major funders of Republican candidates at every level of the US political system.

Here is a call for unity in addressing major challenges that align private and public sectors that is essential to righting the economy, demonstrating support for those who risk their lives on our behalf, whether we support those military actions or not, and who are going to impact the society and our lives in the decades ahead.

I know Green lives large in my worldview, but I think we need to be looking for efforts and expression that are already seeking to bridge worldviews in common cause, whether motivations are shared or not. This presentation by Michele Obama strikes me as such an example.