Critical Realism is a project of emancipation, as Bhaskar has stated, “a total project to demolish the ideologies standing in the way of human freedom”. If this is the project of Critical Realism, then it is also a search for truth or a search for the Alethic truth, again Bhasker, “This is the level of truth in which when we talk about truth of something we are talking about the reality which grounds, explains or causes it”.

Alethic Coaching takes many of the structural frameworks of Critical Realism and applies them in a systemic way to the demolishing of ideologies, and the search for Alethic truth which becomes the prime directive; to empower the Alethic Coaching client to experience, embody, encounter, and enact their own freedom. 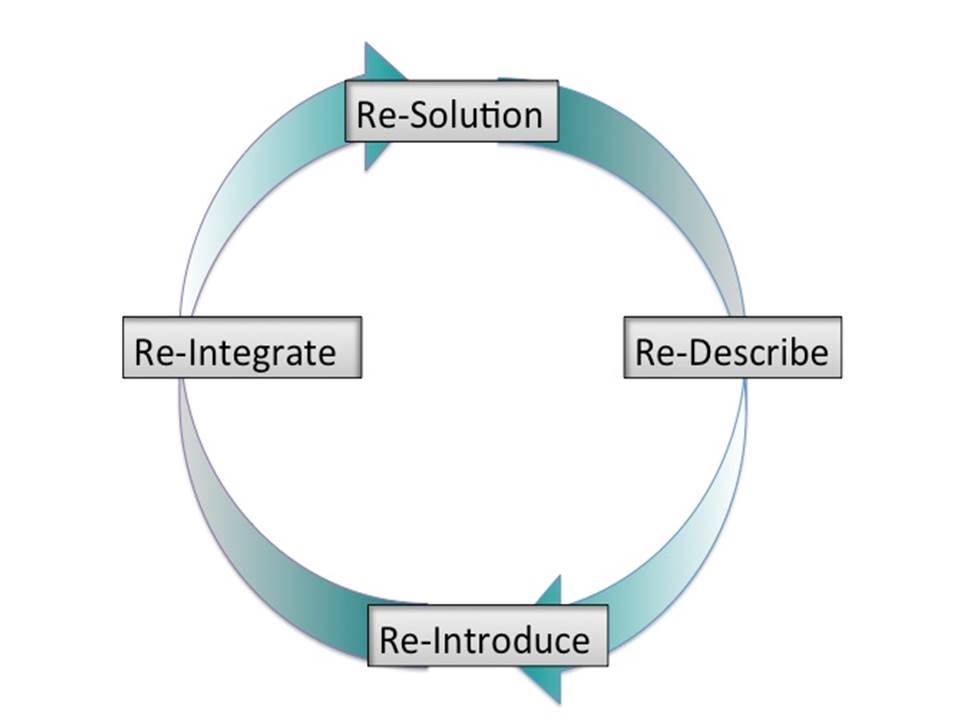 At the heart of Alethic Coaching lies the Four Rs Framework, which derives it structure from the RRRE inquiry of Critical Realism; in this essay, it is my aim to show how the structures of 4R come together to form the foundation of Alethic Coaching.

A client comes to Alethic Coaching because they have found themselves in a TINA Formation; it appears to the client that There Is No or few Alternatives to how they deal with a personal, relational, or work related dissonance they are encountering.

However they try to explain the dissonance they find themselves right back at the centre of the dissonance and the TINA Formation. A TINA Formation forms when something we believe to be true is built on a false premise or theory. No matter how much we try to change the belief, we will not feel truly free until we recognise that our evidence for the belief being in place is false.

To break the TINA Formation, Alethic Coaching uses a process known as Explanatory Critique, which when applied though a Mutual Supportive Alliance (MSA), becomes an empowering tool to help the client recognise the false evidence claim they are making which keeps the TINA Formation in place, and to create the framework for the Explanatory Critique the 4R structure is used.

As much as this statement might sound overly spiritual to some, the MSA does not work effectively unless there is recognition of the importance placed on moving beyond the ego awareness of both the coach and client.

Working towards any freedom means to let go of the demi-reality created by the ego, recognising the actual reality of how things are, and creating a meaningful recognition of a wider sense of an ego free reality or metaReality.

The Spiritual traditions call this recognition non-duality, where we awaken to the awareness that our freedom comes from releasing the block or occlusion that we are separate from the rest of reality. The awakening that we are not separate from reality but that we are reality is the Alethic truth that sustains Alethic Coaching.

Alethic Coaching places emphasis on the coach maintaining non-dual awareness, and working to support the client in awakening to the experience of the authentic change, and growth that can come about when the non-duality under-labours for the client’s freedom.

The first stage of Alethic Coaching is called Re-Solution this is the process by which the dissonance is broken into it component parts, with the aim of creating some clarity around the dissonance.

Recalling also that the dissonance is stratified, that is the casual effect of the dissonance may come from an earlier stage of the clients development.

During this stage, it is important to support the client to avoid 3rd Personal descriptions, such as “It feels like I am sinking”, this explains little about the feeling, and more about the experience. To avoid the epistemic fallacy or explanation by experience it is important to explore any 3rd Person response so as to support a growing awareness of how the client is encountering their dissonance.

“I wonder if you could say a little more about the “it” feeling, what might the feeling be, and how might it be that this feeling is creating the experience of sinking”.

“I feel abandoned, and lost, as if I have lost the ability to survive”

“If sinking is linked to survival, what might you be trying to survive”

“And when you feel not good enough you feel like you are sinking. What might you be sinking into”

This process also helps the client to bring awareness to what the ontological signifier might be in the metaphors used.

Although, I have used an example from a personal dissonance the process is applicable to a dissonance that arises within work or relationships

The important point here is helping the client with the Re-Description stage, in which through the mutual alliance, the coach and client bring a greater degree of 1st Person awareness to the dissonance, leading to a shared understanding of the dissonance that is being experienced.

Once the dissonance has been Re-Describe, though the developed 1st Personal awareness as to how the dissonance might have come into being, the MSA can move to Re-Introduction.

Re-Introduction is the Alethic Coaching stage process where the newly discovered awareness of the dissonance is check to see if all the data generated so far supports a new understanding. In this case, the feeling of dissonance is Re-Introduced as the experience of “sinking into”.

“And when you feel not good enough you feel like you are sinking. What might you be sinking into”

“I now see that I am sinking into myself, the feeling of not being good enough becomes overwhelming, and the only way in which I can deal with the feeling is to go inside myself”

“And you go inside yourself for what reason”.

“Who or what are you protecting yourself from”.

“From the voice of my mother”

“And yet is it possible to say that the voice of your mother is inside you”.

Therefore using Re-Introduction we are beginning to move towards a much clearer view of the dissonance, and how it came into existence.

We are now able to move to the final Alethic Coaching stage, Re-Integration. At this stage, the MSA moves to freeing up the contraction to the dissonance and looks at creating practical ways that the client can integrate the dissonant feeling, whilst finding release from the block or occlusion that pre-supposed the dissonance.

“So you have a past voice telling you how to act in the present, I wonder if in some way you hold on to the past voice because it protects you from stepping out, or moving on. In some way the voice gives you permission to not enact your potential”

“Yes I can see that now, I let the voice take over, I see that the feeling of sinking is there.”

“Yes that’s right, but I am the one who has the power to not sink, not to feel overwhelmed”

“And I think you need to hold onto the feeling of sinking because it tells you to be careful, there is possible danger that needs to be navigated”. “What is important now is to recognise that, the voice of mother is there to protect you and keep you safe, but you now need to tell the voice of mother that you are all grown up now, and thank her for looking out for you, and ask that she will always look out for you, not hold you back”.

“I see what I need to do now I need to step out into the world knowing that I am looked after”.

At this point, we have moved through the Alethic Coaching stages of 4R, in which it is possible to see that what is developing is a dialectic in which is held the constructed reality of the client as a true but a demi-reality. Whilst through the MSA an actual possible reality is explored by freeing the client from their demi-real explanation, leading to the synthesis of a new reality in which the client is empowered to move forward free from the dissonant block, without losing the connection to the original structure that became associated with the dissonance.

As the client works through the 4R process dialectic, more and more freedom is encountered, and a deeper loosening of blocks takes place, and this in turn enables the client to enact within the world with a greater sense of personal freedom.

Of course, the use of the above dialogue is a composite of the sort of work that has been successfully carried out in over 500 hours of Alethic Coaching.

I have also used the composite to demonstrate in a linear way how the 4R structure works.

Along with being the macro framework of the entire journey the mutual alliance takes in supporting the client to find an expression of freedom.

The client comes to Alethic Coaching because they have created an ontology that supported the TINA formation, but this ontology although holding some truth, is partial and restricts how the client makes sense of their world.

Through the MSA, and taking the Explanatory Critique methodology of 4R, the coach and client create a new ontology, which leads to the client creating new beliefs, which moves the client to a more integral view of themselves, and empowers them to see that there are alternatives.

Gary Hawke is a Core Integral Professional, a licensed teacher, and HPC Drama therapist, currently working in Central London with teenagers attending a school exclusion programme and young adults attending a learning difficulties and disabilities programme. Gary has been running ILP sessions and for over 6 years. He recently ran a 6 months experimental London ILP group and has run ILP sessions in Boulder Colorado. Gary is developing ILP into Integral Alive and offers both groups and one to one therapeutic coaching using the Integral Alive Model. He can be contacted at www.alethic-coaching.org