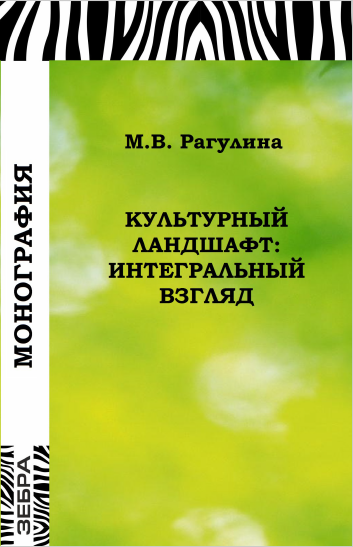 This book is concerned with an integral understanding of the concepts of Cultural Landscape Studies. An approach is proposed (based on Ken Wilber’s theory) that synthesizes theoretically different and contrasting branches of studies into one integrated research interface. Milestones of landscape tradition’s emergence in the main schools of the world’s geographical science are reviewed, origins of formation of a conceptual spectrum for studying cultural landscape in mid-20th and beginning of 21st centuries are explored, foundations for its systematization are proposed. The author’s analysis of the cultural landscape and ethnic identities of Baikal-region Siberia serves as an illustration of the prospects of applying the integral framework that is proposed in this work.

Chapter 1. Human being, culture, and nature in the emergence of cultural landscape theory — 14

1.4. Meaning of landscape morphology and why contemporary geography requires a new reading of classic legacy — 27

3.4. Lower-right quadrant: a geosystemic approach, the limits of analogies and the potential of inteobjectivity — 74

3.5. Intersubjectivity versus / plus interobjectivity: two sets of “axioms” for cultural landscape studies — 82

4.2. Ethnic identities in landscape: the experience of regional research — 111

4.2.2. Traits of ethnic identities and cultural landscape of Baikal-region Siberia in 20th century — 121

(The abstract and table of contents were translated from Russian by E. Pustoshkin)

Cultural Landscape: An Integral Perspective is the first Russian monograph which applies AQAL Integral Framework and Integral Methodological Pluralism (IMP) to construct an outline for an Integral vision of the many-faceted concept of cultural landscape. The author, Milana Ragulina, PhD in Geographical Sciences, offers first glimpses into some possibilities for transforming geography into a cutting-edge integrally-informed discipline that provides both enormous depth and span of its applicability.

The book’s significant contribution is its inclusion of the Russian tradition of landscape studies which formed in the end of 19th and beginning of 20th century. It is represented by such eminent scholars as Dmitriy Anuchin (1843–1923), Vasily Dokuchayev (1846–1903), Eduard Petri (1854–1899), and Lev Berg (1876–1950). The potential of this tradition is, to a great extent, still not actualized by contemporary Russian scholars, and its existence is hardly known outside of Russia. The state of the Soviet science is also discussed, including some of its limitations which originate in its ideological partiality. In 1930s, cultural landscape studies were ended, and in the next half a century the approaches of hard sciences dominated the scene. Nevertheless, Ragulina offers a description of how scientific concepts have been undergoing the process of gradual humanization; she writes how “starting with 1970s, the collective intuition of Russian geographers began to ‘introduce’ human being into natural landscape.”

The key point of the book is that it demonstrates how landscape (and cultural landscape specifically) is a complex notion that evades any reductionist perspective which absolutizes only one quadrant or dimension or aspect. That is, an Integral approach to cultural landscape refuses to accept any kind of exclusionary quadrant absolutism. According to Wilber’s AQAL Integral Framework, reality consists of the multiplicity of perspectives of enactment—of which, in Wilber’s view, the perspective of a holon (something which is simultaneously a whole and a part of another whole) is foundational.

Each and every holon in the universe (including, as Wilber argues, Kosmos per se) has four quadrants, or simultaneously arising dimensions that can be cognized (and self-cognized) at any moment. These four dimensions are interior and exterior of individual and collective: (1) subjectivity (states and stages of consciousness); (2) objectivity (externally observed objects, behaviors, and activities); (3) intersubjectivity (cultural dimension of mutual understanding and resonance, collective worldviews, etc.); (4) interobjectivity (ecosystems of communication and societal/environmental feedback loops).

Any perspective on a holon which fails to account for these four broad dimensions is bound to be reductionistic and less-than-holistic. Landscape, apparently, is not a sentient holon, but it is a complex phenomenon which is intimately interwoven with life processes and activities of sentient holons. Ragulina refers to the 8 zones of IMP and shows that landscape can be looked at through what Wilber and Esbjörn-Hargens & Zimmerman call quadrivia (which means that any given phenomenon can be looked through the perspectives of these four quadrants with their particular methodologies, such as phenomenology, empiricism, cultural anthropology, systems theory, etc.). 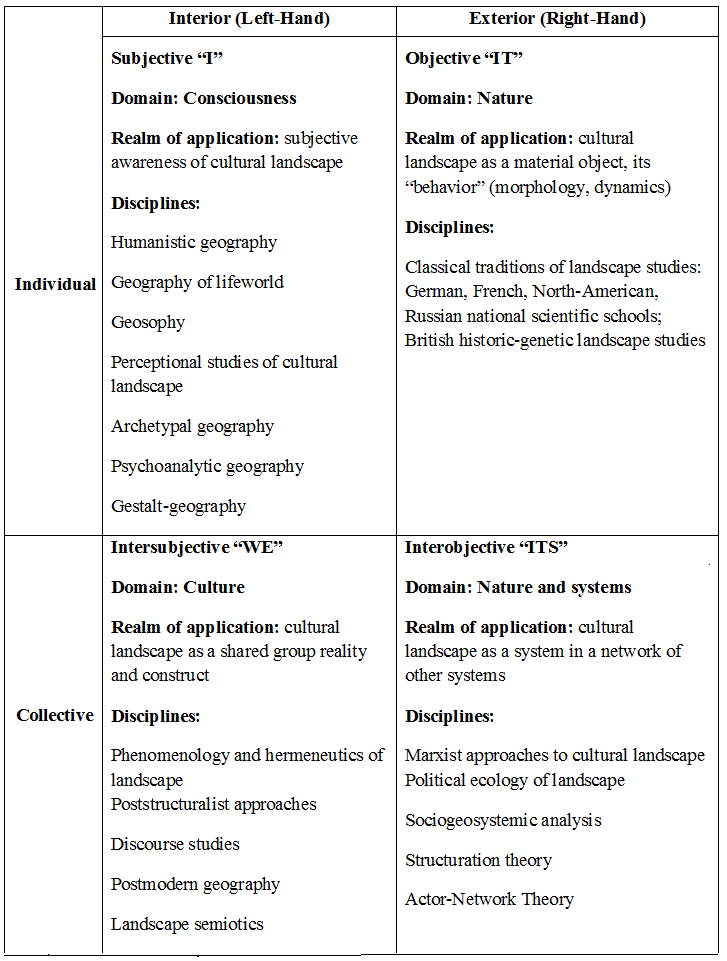 One can see that the author has studied these important concepts of Integral Theory and Practice (AQAL, IMP, quadrivia, etc.) and attempted to bring forth an integrative perspective for her own discipline in relation to landscape studies. She reviews the evolution of the “landscape” concept and demonstrates its gradual complexification in the course of modern human history. While in 19th century “landscape” was interpreted mainly as a sum total of objects in an area and an object per se (so-called modernistic reflection/representation paradigm), in the first decades of 20th century it started to involve social relations and societal structures; and, since mid-century, it has included subjective personal and group/collective experiences of spatial, cultural, and values-systems patterning (postmodern paradigm and later). Today, all of that inherently and integrally belongs to what is referred to by the signifier “landscape,” if one actually takes a comprehensive view and reviews the existing perspectives on the phenomenon (traditional, modern, postmodern, and integral).

“My firm conviction is that a “healthy” variant for the development of knowledge on cultural landscape includes the idea that subject-related (depth) and object-related (surface) research paradigms are equally important—both the view of “an observer” and the view of “an initiated.” Only then landscape will be conceived as a morphogenetic unity of a system of objects which is filled with existential meaning and perceived through the lenses of individual and collective experiences. . . . Synthesis and integration is what today’s landscape studies need. It is interaction of landscape approaches—rather than their struggle against each other—that is of more benefit.”

Based on her own insights as well as data from literature, Ragulina offers useful descriptions of how cultural landscape is “inhabited” and “co-enacted” by populations of different vMEMEtic patterns (of SDi) or complexity levels of values systems/levels of consciousness. She offers a case study for an Integral research framework based on the history of colonization Baikalian Siberia. This part of her work is available in English translation in the form of an article: “Integral Approach in Investigating Cultural Landscape and Ethnic Identities (A Case Study of the Tofalars and Evenks of Baikalian Siberia)” (New York: Nova Science Pub., 2012). This material can be freely accessed at Nova Science Publishers’ website. The abstract of the article goes as follows:

“This author’s version of integral approach combines the constructivist, ethnoecosystem and cultural-anthropological ideas within the framework of the theoretical research scheme for social identity. The cultural landscape is treated as a contextual “embodiment” of the identification processes. The integral approach is used in investigating the factors and processes that are responsible for formation of a spectrum of ethnic identities of Baikalian Siberia. This Russian region lies in Northern Asia and is noted for its natural contrasts and ethnic diversity. This region has been inhabited and developed from time immemorial by nomadic peoples belonging to the hunting–reindeer cultures—Evenki and Tofalars. Starting in the 17th century, Russian colonization became the factor that “triggered” radical changes in identification of both the native population and of the newcomers. The dramatic events of the 20th century, namely the institution of Soviet power, a forced conversion of the nomadic to the sedentary way of life, and the post-Soviet transformation of the economic and political system of society stimulated a further complication of the identificational gamut of the taiga nomads: the Tofalars and the Evenks. As a result, islets of “digital society” combine with archaic self-identification in the mythological field of animism, while the pragmatism of natural resources utilization neighbors upon the perception of one’s group as the heir of millennial ecophilic traditions. The Siberian local sociums and ethnic groups generate “interior” processes of identification and assume the “exterior” standards that are prescribed to them, by incorporating or refusing some aspects of social morphology, political events, economic practices, intercultural exchange and spatial-geographical characteristics.”

To conclude, cultural landscape is not just natural landscape modified by human activities, as some earlier-period works suggested. The existing abundance of inter- and transdisciplinary approaches towards cultural landscape allows Ragulina to propose that cultural landscape can be conceptualized as a living, “tetra-evolving” unity. Cultural landscape manifests as a unity of subject and object in their individual and collective forms; these forms demonstrate evolutionary patterning which includes increasingly more complex depths of consciousness, culture, material and economic basis, and so on.

Cultural landscape is not just a material object and its observable activities formed under the influence of its human and non-human inhabitants—an objective place where one “just” lives—it is also subjective awareness of it and empathic resonance with it which involves the domain of existential meanings, aesthetics, feelings, intentions, desires, associated with cultural landscape; it is a hermeneutically cognized and co-created phenomenon which includes shared values, norms, patterns of perceiving, belief systems related to it; and it is a system interacting with a network of socioeconomic, environmental, and political systems, and so on.

Applying Integral Theory to landscape studies and geography may certainly provide creative momentum and fresh perspectives to scholars from all regions of the world. However, due to the size, history, and tetra-diversity of Russia, using Integral Theory becomes a necessity for Russian scientists. The approaches that are reductionist, limiting, and make claim for exclusivity cannot offer a clear and comprehensive picture and bring forth genuine understanding. This does not mean that there are no objectively-visible gaps in our knowledge which result from longterm ignoring of certain quadrants by science. But, according to Ragulina, “the requirement of formal quality of filling the gaps, of ‘balancing’ the quadrants is not as important as the principle of non-exclusion.”

An Integral framework allows gaining access to a broad panoramic view of cultural landscape in which no essential aspect of this phenomenon is left unseen. 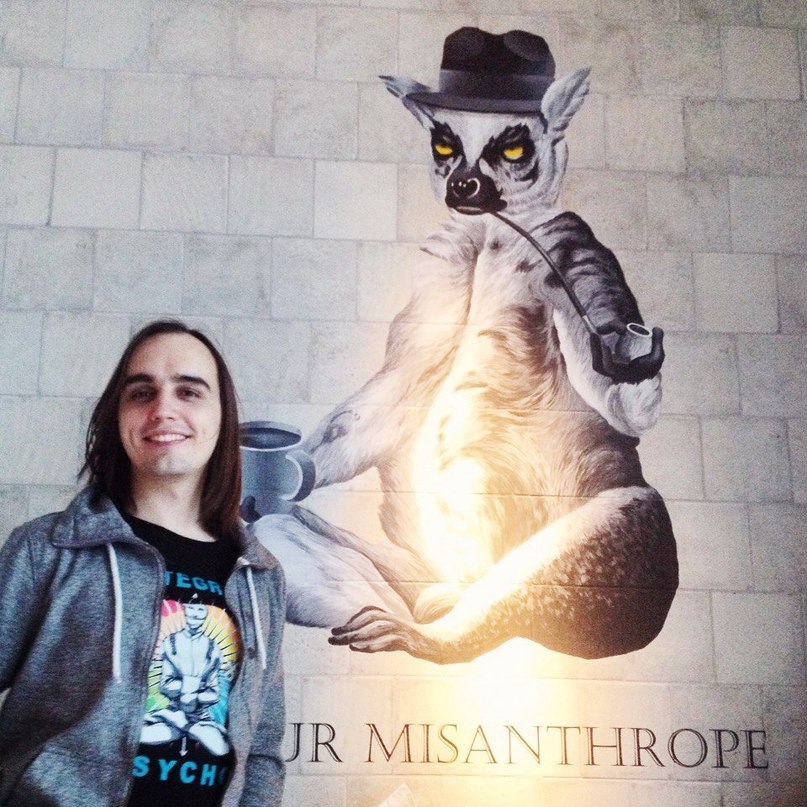 Eugene Pustoshkin is an integral psychologist, translator, and integral scholar-practitioner. He lives in St. Petersburg, Russia, and currently serves as the Chief Editor of Eros & Kosmos (see: http://eroskosmos.org/english), the Russian Integral online magazine he co-founded; he is also the Bureau Chief / Associate Editor for Russia at Integral Leadership Review. Eugene graduated as specialist in clinical psychology from St. Petersburg State University, and now maintains private practice, offering counseling in Integral psychotherapy and mentoring in Integral Theory. He translated several books by Ken Wilber and works of other Integral authors. Since 2014, he has been organizing and co-facilitating (together with Helsinki-based therapist Sergey Kupriyanov, PhD in Medicine) Holoscendence workshops in Russia and other countries. Contact email: eapustoshkin@gmail.com 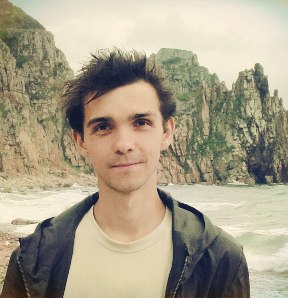