“Big Society” Lacks the Leadership Skills to Make It Happen

With much fanfare, the UK prime minister David Cameron recently relaunched the Conservative party’s flagship policy called “Big Society”. Up to now, the UK public have struggled to get their minds around exactly what the “Big Society” means, and the idea has frequently been ridiculed in the UK tabloid press[i].  In essence, the idea behind the policy is that “big government” in the form of centrally controlled public services is bureaucratic, inefficient and wasteful. “Big government” needs to be dismantled and replaced by giving the public more control[ii]. In practice this appears to mean that the current Conservative/Liberal-Democrat coalition government will take three key forms of action:

All this at a time when the UK is struggling to get back to normal levels of growth after a devastating financial crisis.

But why the need for a relaunch? Much of the pre and post election rhetoric this time last year was “big talk” indeed. The ”big society” would be “matched by big citizens”; would “replace Britain’s broken society”; and was about “a huge culture change”. David Cameron referred to the project as his “great passion”[iii]. Government laid plans to de-centralize, to provide finance, and to provide trained officials to remove obstacles and bureaucratic log-jams. 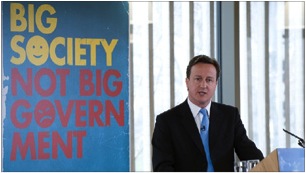 Nearly one year on, the British public has been waking up to the daily reality of increasing inflation, unemployment, soaring fuel prices and additional taxes. VAT has risen from 17.5% to 20%. A huge spending squeeze is descending on the country as the government attempts to balance its budget. As the outgoing Labour Secretary to the Treasury wrote to his successor last year, “there is no money left”.   It is hard to think of a worse time to expect people to come forward to contribute more to their communities while government cuts back. Even the government’s own advisor Lord Nat Wei, a key figure in the drive to encourage citizens involvement in community and charity work, has had to cut his hours citing a need for time with his family and a lack of funds (his was not a salaried position)[iv].

More significantly, local governments have responded to the spending cuts by suggesting the likely closure of “hundreds of libraries, sports centres, public toilets and services for the elderly, disabled and children”[v]. Public services are under threat and the means and organization to replace their provision is not yet in place. The “big society bank” will have initially only about £300m in assets. Not much to offset a projected reduction in local authority spending of £6.68 billion over the next four years.

Bringing the “Big Society” vision into reality is therefore a significant leadership challenge, one that even the most experienced team of organizational “change agents” might find startlingly daunting. At its simplest, the three forms of action require three different kinds of leadership initiative. Firstly, the transfer of power to local communities implies ensuring that local communities have the requisite capability to make the kind of decisions that previously were made by central government.  Secondly, the reform of public services implies a structural change programme that will involve a massive management re-organisation. Thirdly, the creation of a new generation of socially aware citizens who are willing to contribute altruistically implies a huge shift in culture from the free market values championed many years ago by a previous conservative Prime Minister, Margaret Thatcher, and which have dominated Britain’s resurgence as a nation of financially obsessed home owners.

We might fairly ask, what are the leadership skills required to bring about such changes and what evidence is there that they are available in sufficient quantities?

Transfer of power to local communities

Proponents of the value of “empowerment” point to evidence that self-managed teams perform better and their members experience a greater sense of well-being. But a review of the literature shows that the evidence is not unanimous and that the successful implementation of “empowerment” is contingent on a host of other factors[vi]. Even the most simple management model, Hersey and Blanchard’s “Situational Leadership Theory”[vii] suggests that effective leadership is dependent on a match between the leader’s preference when making decisions, the task and the characteristics of the people being led in terms of their readiness and ability to take responsibility. “Big Society” as formulated by David Cameron assumes that local communities are ready for “empowerment”.  We can only hazard a guess as to whether any particular local group or community is, in Hersey’s and Blanchard’s parlance, mature enough to jump from being told what to do (by central government) to having decision-making delegated to them. Inevitably some will and some will not rise to the challenge.

Whilst a key principle underpinning the “Big Society” is fairness, not all communities are created equal. Groups that are currently disadvantaged, such as those where there are high levels of unemployment, crime, and poverty may find “empowerment” more of a burden than an advantage.   The risk then, as many managers have found when experimenting with delegation, is that confusion sets in regarding what subordinates are and are not responsible for. For example, if local authorities are to have a greater say in deciding where to allocate their resources, what will the Government do when they make different choices to those that the Government see as “fair” or in the interests of “Big Society”? Under such circumstances, delegation often rapidly reverts to central control.

The Government is due to announce its proposals for structural reform of the way public sector services are provided in a white paper very shortly. In essence, the reform will be based on the principle that public services should be provided by organizations in competition, not by a state run monopoly. Private companies and charities will be encouraged to compete for the business of running local services. The government believes that such competition will improve both quality and choice in the services provided.

Britain has a chequered track-record in its experience of privatization over the last thirty years[viii].  The rail industry privatization that followed that of the utilities and telecoms industries was partly reversed by the bankruptcy of Railtrack, the rail network company in 2001, and the part-privatization (PPP) of the London Underground commenced in 2003 was effectively reversed last year.  Perhaps more significantly, the National Health Service has been continually in a state of reform since the 1973 NHS reorganization act. The assumption that competition will lead to more innovative, higher quality, and more efficient public services is not backed by consistent evidence. Indeed the principle of market competition is driven by the human pursuit of self-interest, not altruism. To the extent that the “Big Society” has the aim of producing citizens who care for each other and their communities, the restructuring of larger institutions into smaller competitive and financially driven organizations seems contradictory.

The government’s programme to encourage and enable people to play a more active part in society is already underway[ix]. Four initiatives are being undertaken, National Citizen Service, Community Organisers, Community First, and the Big Society Bank. The National Citizen Service initiative is targeted at youth. 10,000 16 year olds will take part in summer activities that support local community projects. The Community Organisers project will identify, train and support 5,000 people who want to “make a difference to their community” over the next 4 years. Community First is a fund to support neighbourhood groups in areas of high deprivation, whilst the Big Society Bank will take money from dormant bank accounts and lend this to funds and operations that in turn make direct investments in social enterprises.

Two questions about these initiatives are immediately obvious. Will they make any significant impact, and how much money will be available for them? Both questions are unanswerable at present.   What is clear is that the Government thinking in terms of encouraging more altruistic behaviour on the part of its citizens does not extent to considering how a view on adult development might assist the encouragement of such behaviour change. The work of Harvard psychologist, Robert Kegan points to an incompatibility between the demands of modern life and the capacities of adults to cope with the associated mental complexity[x].   If Kegan is correct, the match that David Cameron seeks between the “Big Society” and “Big Citizens” cannot be assumed, but must be actively facilitated, since according to Kegan the proportion of adults at or above stage 4 (characterized as the “Self-Authoring” mind) is at least less than 40% and probably nearer 25%.  In fact the emphasis on training specific skills and the targeting of teenagers, suggest that this government is more focused on consolidating the stage 3 mind – that which is socialized (largely unconsciously) by the values of people in a person’s immediate community. Such a “social conformity” approach is more likely to preserve the status quo in whichever community it is instituted, than to create genuine innovation in services.

The need for better leadership

Politicians are stereotypically strong at articulating a future focused vision, but weak in understanding how to turn that vision into a reality. While his intellectual capacity is not in doubt, David Cameron’s career has not exposed him to the difficulties of change management or the leadership of people from diverse backgrounds. He is therefore dependent on advisors for practical guidance on policy implementation. An “integrally” schooled leadership advisor might counsel him that the three forms of action being put forward to bring about “Big Society” are neglecting Wilber’s “upper-left quadrant” in terms of their impact on the subjective consciousness of the UK’s citizens from the points of view of individual perception and personal development.  An experienced organizational “change-agent” might advise him that the kind of radical culture change he wants to make will take many years and have many unforeseen consequences and difficulties. A leadership coach or mentor might have encouraged him to “manage expectations” by not making it so explicit that his goal was to institute the “Big Society” in the life of one parliament. And finally, a dialectically-schooled thinker might warn him not commit the “epistemic fallacy[xi]” of assuming that what is presently ”known” as scientific fact in terms of how to create social change is reality. A quick glance at what is happening in the Middle East reminds us that the world is still full of surprises.

Nick Shannon, UK Bureau Chief for ILR, is the founder and principal of Management Psychology Limited, a UK based practice specializing in organizational and management development. Nick is a Chartered Psychologist, a member of the British Psychological Society and a founding member of the Association of Business Psychologists. After studying Psychology and Philosophy at Oxford University, Nick’s career has involved working variously as a commodity and derivatives trader, a director of a foreign exchange business, and a restaurateur.  Latterly a business consultant, Nick’s goal in working with clients is to help them improve the quality of their management teams, which he believes leads to better organizational performance and more satisfied and engaged employees. Typical assignments involve the design and delivery of assessment, selection and development processes at three points of focus: individual leaders; senior management teams; and organization-wide.

[ii] David Cameron. “How we will release the grip of state control”, article in the Daily Telegraph 20th Feb 2011

3 thoughts on “Notes from the Field: “Big Society” Lacks the Leadership Skills to Make It Happen”