Robin Lincoln Wood. The Trouble with Paradise: A Humorous Enquiry into the Puzzling Human Condition in the 21st Century, Foreword by Ken Wilber. Bloomington, IN: Authorhouse, 2014. 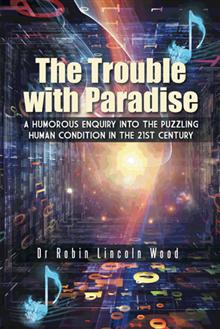 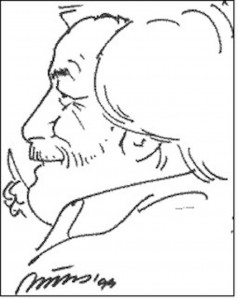 I met Robin Wood about a decade ago. He was in San Francisco to explore and promote his work in Europe, Renaissance 2, an integrally informed conferencing and networking effort that has touched the lives of many. I must admit that I have not tracked these activities very closely. When I discovered Robin’s new book, I saw the read to be an opportunity to catch up with his work. I had no doubt that it would be a rewarding experience. I was particularly intrigued by the idea of a humorous enquiry into the human condition.

I should point out that I approached this adventure from the point of view of a man who is approaching 80 years of age and who has in recent years been confronted with several challenges to his physical existence. These have prompted a reflective energy about what does one do in the closing years of one’s life that has meaning. I have a 91+ year old step-mother who – with the help of modern medicine – seems to be thriving and declares that she intends to live forever. Well, given the status of my health I think it unlikely that I can match that.

What-to-do questions also lead me to the what’s-the-point question. Since I am an atheist I do not expect there to be anything left to my life when I die, except the memories and opinions of others, some artifacts and a few writings. Love encourages me not to be a profligate with my remaining time, but to support those I love and encourage others with their pursuits in any way I can.

So what I am doing now includes writing reviews of books, including the occasional read that I enjoy or find positively challenging. Robin Wood’s book is one of those. Much to my surprise I find it to be about the very questions I have been raising, albeit with the frame of mind I bring to it I found the humor to be rare. But wait! It is about a lot more than that!

Robin Wood is at least a close approximation to a Renaissance Man a la the 21st Century. This book attests to that, as does this short passage about a visit to a friend at a seaside resort in western Canada

It reminded me of the better south coast British seaside resorts, without their seamier sides. His home was a haven of tranquility, and his family charming. I felt possibility space all around me, in the open skies, the light spacious rooms, and the easy-going atmosphere. We discussed complexity, philosophy, people and nature. We played songs from the sixties and seventies on two guitars, and sing [sic] in our out of practice ‘guys who used to have bands when they were young’ voices.

Just think about the range of interests represented in this memory. All of this is in contrast to our hours upon hours and days upon days sitting staring at the screens of our computers as substitutes for relationship, community and career building activities face to face.

Laced with autobiography – and one that is resonant with the experiences of many who are pursuing their development – in which he recounts international travels, education, work experience and family origins, as well as encounters with folks like Don Beck and Ken Wilber, Robin also provides us with excursions into religion, culture – including music, science, adult development and spirituality (I fear I omit some).

The central theme of the book is

Thus, the need to explore all of the domains listed above. As we have encountered these challenges our responses have fallen into one or more of several categories: deniers, modernists, existentialists, mystics, activists and terrorists. While I am not sure that it is so explicitly stated, Robin’s hope is that by appreciating the scope of perspectives explored in this book and elsewhere, more and more folks will turn to generative ways of engaging the world. Like Darwin, he sees hope in increasing human collaboration with the help of the technological (collective) and developmental (individual) artifacts of our time: “The history of our species has been the gradual triumph of such collaborative endeavours over the intermittent massacres we have carried out on an increasing scale as we have developed more powerful and deadly technologies.” And a path he would encourage is drawing more on nature to guide us in those endeavors.

In reflecting on his life in the south of France where he has bought and renovated a chateau for hosting workshops and other gatherings, Robin says,

Here, then, is a simple recipe for bliss: take one human body, add a twist of sunshine, and then garnish with a dash of nature. For extra special happiness, add a loving mate and a drink of your choice. Splashing in a bit of water is also highly recommended, and if you can find a pair of turtle doves to coo you are in paradise. The smells of jasmine, lavender and orange blossom complete the picture.

But, then, he turns his attention to the question of what might be deeper and asks the question, “Can a theory of everything change anything?” This is his introduction to the work of Jean Gebser, Ervin Laszlo, Don Beck and Ken Wilber. All of this with the observation that there is trouble in paradise. The troubles are familiar to all of us – climate change, the oligarchic dominance of societies, conflict and war among those anchored in the past and those seeking an improved future (while both use technology to destroy and create).

There are opportunities for immediate application to address the troubles in paradise. They can be found in biology, medicine and longevity; understanding consciousness and the mind; demystifying paranormal phenomena; human flourishing through spirituality and activism; integral models of development; education and innovation; and embedding “ThrivAbility” through green economics. He brings optimism to his future and that of paradise as a result of a lesson he learned as a teenager: “no matter what your age or circumstances, you can make a positive difference in the world if you put your mind to it.” We can make a positive difference by connecting up, creating global transdisciplinary research and

…catalyzing the conscious evolution of integral, world-centric culture through innovative approaches to the development of human consciousness and potential (‘goodness’), the advancement of our symbolic intelligences and narratives (‘truth’), and the expression and appreciation of our civilization in all its magnificent forms (‘beauty’).

In conclusion he offers ten “propositions about how the universe works and why it matters.” I won’t enumerate them here, but one speaks to my late in life concerns: we all know we are going to die.

In the timeless and infinite implicate order [David Bohm –RV], however there is no death. Whatever has existed will always continue to exist, though it all will have evolved beyond all recognition through the eons. Death loses its sting when looked at from the implicate order side of things…

No death? Somehow, this smacks of the faith of traditional religions translated into the thinking of a modern physicist. We may all be looking for something more, something more grounded in our current reality. In my case, no theory – be it spiritually or scientifically based – is likely to provide satisfactory answers to my questions of being and doing in this very late stage of my life. Each of us is just going to have to make choices, whether based on “beliefs” or flipping a coin. Then we experience the consequences. As Robin notes, though, “Death is simply the universe’s way of telling you to stop, so that you can begin the next adventure.” Well, I find that difficult to accept. It is another offering of the notion of reincarnation.

All after life frameworks that promise the perpetuation of the self in any form are egocentric graspings at the few remaining straws of existence. But thanks for the try, Robin. I hope you never encounter anything like my circumstances and that you advance to an age far beyond any that I am likely to see. But when it is over, it is over. If meaning matters, then that part of your work that encourages us to find it in the here and now is the most satisfying to me. While information and atoms continue to exist after our (my) death, “I” will not. What I leave behind will consist of many forgettable elements and some things I may have done or not done that influence the evolution you write about. Some of those things are best forgotten, particularly in the healing of some of those I have engaged with in this lifetime. I have no idea what will continue, what about my being and doing others will value or carry on – with or without awareness of their sources.

Robin, thanks for your work, your book. It has been a wonderful read.