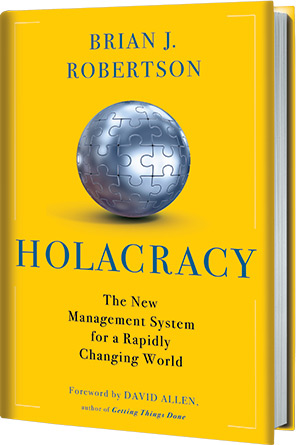 On May 29, 2015 FastCompany published an article about Zappos and holacracy. (http://www.fastcompany.com/3044352/the-secrets-of-holacracy.)

Here is a quote from the program referring to the work of Brian Robertson:

Holacratic governance is the brainchild of Brian Robertson, a serial entrepreneur who sought better ways of running his companies. He likens the system to cell biology.

“You don’t have a boss cell telling the other cells what to do. Every cell has its own self-organizing process,” Robertson says. “And yet, they’re kind of grouped together into an organ that integrates them and itself acts as a whole entity.”

Robertson says about 300 organizations — including Washington state government and companies both large and small — are using or piloting holacracy. He says it makes organizations nimble and adaptable.

But, he admits, it can be a difficult adjustment, especially for organizations accustomed to a top-down hierarchy.

“There’s something almost safe and comforting, even when we don’t like it, about being in a system where there’s somebody else whose job it is to protect us, take care of us, nurture us,” Robertson says. “And when they don’t do that well, we get to be angry with them and blame them and hide behind them.”

This year, Robertson published his book, Holacracy. Given his interest in integral, it is truly significant that his work is being recognized on NPR. And it is significant that Zappos is not the only company trying this approach.

It is estimated that a successful holacracy organizational change process takes about five years. And, despite the basic structural design, it is not a one-size-fits-all approach. Rather, it is a learning process – and the structure supports learning. A must read for folks who are invested in organizations everywhere.