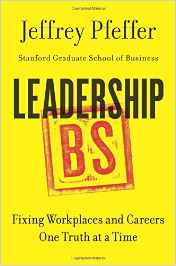 In the year 2000, Chris Argyris introduced the new century with his publication of Flawed Advice and the Management Trap: How Managers Can Know When They’re Getting Good Advice and When They’re Not. In this exceptional book Argyris calls to task various very well known management and leadership gurus and spells out why their advice should be carefully examined and much of it rejected. Why? Because, for the most part, individuals can neither be trained to replicate the qualities advocated and, for the rest, it is not implementable. This may not have been the first shot across the bow of the leadership industry, but it certainly was an important one that should have given such gurus and their minions pause to reflect, revise and reconsider. Their apparent failure to do so has perpetuated the 80 billion dollar leadership industry.

In the year 2010n Barbara Kellerman, founding Executive Director of the Kennedy School Center for Public Leadership at Harvard University , published The End of Leadership, a broader denunciation of the leadership industry. See Dick Couto’s review of this book and my interview with her. She stated:

As a whole the leadership industry is self satisfied, self perpetuating and poorly policed; that leadership programs tend to proliferate without objective assessment; that leadership as an area of intellectual inquiry remains thin; and that little original thought has been given to what leader learning in the second decade at the 21st century should look like.

In the year 2015 Jeffrey Pfeffer, Stanford Graduate School of Business professor who is well known for his work on power in organizations, published Leadership BS: Fixing Workplaces and Careers One Truth at a Time. He, too, repudiates the leadership industry of which he is a member (and as Kellerman points out, so is she and so am I). He states:

…much leadership training and development has become too much a form of lay preaching, telling people inspiring stories about heroic leaders and exceptional organizations and, in the process, making those who hear the stories feel good and temporarily uplifted while not changing much of what happens at many workplaces.

So he has buffed the edge of the article, leaving open the possibility that something better is being offered by someone, somewhere.

His purpose in this book is to point out:

…the qualities we actually select for and reward in most workplaces are precisely the ones that are unlikely to produce leaders who are good for employees or, for that matter, for long-term organizational performance.

Basically, his argument is that our promotion of heroic leader qualities and behaviors is misplaced and that what we need is for individuals to take care of themselves. His (Ayn) Randian perspective of leadership, heavily influenced by classical economics, is based on the idea that those in “leader” roles most usually are looking out for themselves because their aspirations may or may not be aligned with the organization. Therefore, all employees are looking out primarily for themselves, including those in leader roles.

Authenticity is overrated, lying is legitimate, trust it noteworthy for its absence and leaders look after themselves first, and maybe then they will consider employees. So what are we to do:

Take care of yourself and assiduously look out for your own interests in your life inside work organizations.

This doesn’t mean that there aren’t good bosses who look after the interests of others. Just don’t expect it in your work situation! Self-interest is the normative principle for system design. Competition is good. Individuals will grow up and not rely on the goodwill of others. Furthermore, the

…list of leaders who, on the one hand, earned vast sums and retained power for decade3s while, on the other hand, being in almost every way contradictory to the customary bromides about modesty, serving others, and being truthful is almost endless and it’s a list that grows longer all the time.

So we are to face reality. We are strong enough to do so, says Pfeffer. And here is what he offers as guidance:

If we are going to develop worthy advice and guidelines to those in “leader roles [my quotes]” we have to focus on the context. Here is a very integral assertion:

…to be a better leader also depends on knowing the environment you are in, its norms, and, most important, what behaviors 2wioo be seen as demonstrating weakness and incompetence and what action will signal strength, confidence, and skill.

Culture matters. And so do decision-making, communications and reward systems. So does how information flows across exterior and interior boundaries. Pfeffer didn’t go quite that far. But I am sure he would.